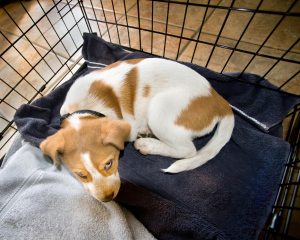 I rescued a 10-month-old a month ago. He was crate trained and all of a sudden won’t come into my bedroom for bedtime routine, despite real meat treats. No treat or verbal good boy works and he sits on his butt or lays down in living room when I say “O.K. Lets go to bed”. I have to carry him and gently put him in crate with favorite toys and chewy. I get right in bed, lights off, no talking. Then he goes to sleep.

I recently had a similar issue with my new young dog. For a very short period of time, she started running away from me when I asked her to crate up so I could leave after lunch to go back to work.  She wasn’t doing this behavior at all with my husband and it was never at night. It was only at that specific time. My best guess is that because sometimes I take her to work, she didn’t want to crate but instead to go to work with me. I usually would grab a slip lead and walk her over to the crate and she would go in on her own. Luckily, it only lasted about a week or two and then she started going in every time again.

That being said, just to be clear, I would not leash a dog and drag them over to the crate. If she had refused to move, I would have needed to change my tactics. Similarly, we want to be sure we are never forcefully shoving a dog into a crate. Besides the fact that some dogs will react aggressively to that type of handling, it also creates a negative association with it. I am glad to hear you are being gentle with his handling. Ideally, he should be going into the kennel on his own rather than being placed in the kennel which could be a negative association for him.

Some people in the past might have used the crate as a punishment which could create a negative association with the crate. I personally will use the crate when my puppy is being unmanageable or I need a break. It gives the dog a time to calm down when needed or management when I can’t deal with her. If you were yelling at the dog and angrily pushing him in the crate, then it could be viewed as punishment in the dog’s eyes. Keep your voice neutral or happy and give the dog a nice bone or treat when you put him in there to avoid it being punishing. 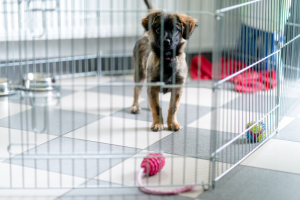 If he has a negative association with the crate, you could try a different type of crate or placing the crate in a different location. Maybe place the crate in the living room and see if he likes that better. If you use a wire crate, try an airline crate as some dogs prefer those type of crates. Make sure his crate as inviting as possible by placing the comfiest bed inside. Check that the crate isn’t near a vent or window that might have a draft or too much heat which could be uncomfortable.

You may want to consider alternative confinement solutions while you work on retraining him. This could be a bathroom, kitchen or utility room so that you can easily clean up accidents and is easily puppy proofed. I usually like to use a baby gate rather than closing the door. A lot of dogs prefer the gate, possibly because the door being closed makes them feel too isolated.

Did you personally crate train him? If not, there is a very real possibility that he was not actually crate trained before he came to you. I hear this a lot from people who adopt dogs. The dog initially goes right into the crate when they first bring him home. He is quiet and doesn’t complain about being in there for a few weeks. Then suddenly he hates going in and starts complaining when he does.

When dogs first come home, they are unsure and not quite settled in their new homes. This can cause some dogs to be on their best behavior. They are quiet and compliant because they aren’t completely comfortable in this new environment. We call this the honeymoon period. It varies from dog to dog but it usually lasts over around a month or so. This might be what is going on if you did not personally crate train him or know the previous owners crate training methods.

A common training issue is that many people only crate their dog when they are leaving the house or sleeping. Both of these times are times when the dog might feel isolated. Even if he is in the same room with you, it could be for this dog that being away from you is a negative.  It is a good idea to have multiple crates in different rooms or to move the crate room to room with you at first.

A way to counteract this is, when you have worked up to the dog being in the crate with the door closed. you stay in the room with him. An example would be, crating the dog while you are eating meals in the room. Most new dogs don’t have manners around food at first. Another example, is enforced naps throughout the day for puppies. My puppy wouldn’t nap on her own at first so I would put her in the crate and she would fall asleep. The times the dog is in the crate will vary so that sometimes they are only in there for a short while and sometimes for longer periods of time. We later can work on leaving the room while the dog is in the crate.

An easy game to try and build motivation to go into a crate is to place a really high value treat like a knucklebone and close the door of the kennel.  Show him the treat and place it in the kennel with the door closed. Place the bone at the front of the cage at first and as your dog gets better about going in, start placing it further back in the crate. Let him spend a few minutes trying to get the bone from outside the kennel and then eventually open the door to let him get it out. You don’t need to close him in there for this game, just let him get it out if he wants to.

Over crating is another reason why a dog might start refusing to enter the crate. You don’t mention if you crate him during the day or not.  Most young dogs are going to have a lot of pent-up energy if they spend too much time cooped up. It could cause them to feel uncomfortable in the crate and cause a negative association.

If you have to be gone all day, I would suggest dog day care, a midday pet sitter or containing him in a puppy proof space like a utility room with lots of food puzzles and toys. Depending on his size, you could put a pen around his open crate to give him some additional space to move around. That might be a good option at night as well so that he is in a confined area but doesn’t feel shut in the crate. Some dogs just never do well with being confined in small areas. 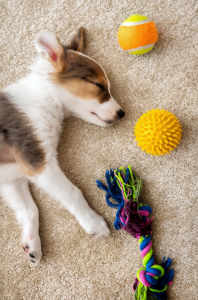 When you are home, be sure that he is getting enough exercise.  Find out what kind of exercise your dog likes and offer him three 15-minute play sessions daily to start with and see how he responds to that. All dogs have different exercise needs. The important part is that it is interactive play like fetch, tug, flirt pole, hikes, walks and playtime with other dogs and not just being alone in a fenced yard.

Consider adding in enrichment feeding and training sessions daily as well to create a well-rounded enrichment plan which will help him to settle. If you make sure his needs are met for exercise, nutrition, training, petting and food enrichment, he will likely be calmer and happier in general. If he is tired at the end of the day, he may be more likely to crate up and settle down.

Your puppy is full on in adolescence so it could be that he is testing his limits to see what he can get away with. One of my favorite training methods is the Say Please Protocol especially for new dogs who need to learn the structure and rules of their new home. This protocol simply says that the dog should ask for the things he wants by sitting or some other polite behavior before he gets anything that he wants. This training program gives your dog a reason to listen to you when you ask him to do something and helps him understand what we expect of him in the home.

Behavior and training never go in a straight line. You will have days that are great and others when he seems to regress. It’s all part of the process. We need to stay consistent with our training and every success will build on the last. Remember that you are still working on your bond with him so its extra important that we always work towards making things positive for the dog. This will help him to trust you when you need to do something with him and give him a reason to listen when you ask him to do something. Good luck!

A Destined Match
Scroll to top