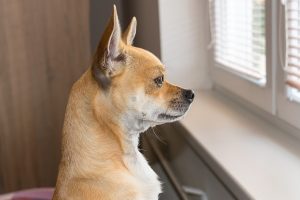 I have a long-haired mini-dachshund – Sugar – who is barking a lot. He likes to sit on the back of the couch and bark at passers-by. He barks when we are on leash walking. The most annoying habit is barking at anyone coming in the door, especially at my adult son who lives with us. As a puppy he was not a barker but began this behavior after going to daycare (he is no longer going to that daycare – too many dogs and he became fearful). Any suggestions are welcome. When visiting my niece, he wore a bark collar that vibrated and that scared him but worked, she has two cats, and he wouldn’t stop barking. Thank you.

Pup has a lot to say

Dachshunds by nature tend to be one of the barkier breeds. They are hounds which tend to be fairly noisy breeds. They were bred to hunt animals in burrows and bark until their owners came. I personally find that if I understand the intrinsic reason a dog is barking, it helps me to have a little more patience. It is likely that you can curtail some of the barking with some effort, but you will not be able to get rid of it all together.

We always start with management with any behavior problem. You do not want him to keep practicing this behavior. The longer he practices the undesired behavior, the harder it will be to curb the behavior. I suggest making a list of triggers similar to what you have given here but more detailed. Then step by step, think of ways to prevent the behavior. For some behaviors, management can be a long-term solution. It is often easier to prevent the behavior then to actually fix the reason why the dog is barking. Regardless, you must be managing the situations before you can begin working on behavior modification.

If he is barking while sitting on the couch, I assume he is looking out some sort of window. The options for management would be closing curtains, putting an opaque window film, using gates or pens to keep him out of the room. Playing some music or the tv can help block out the noises that might cause him to bark.

Without witnessing his behavior around your adult son, I can’t really say his exact motivation for that behavior. Be sure to study up on dog body language so that you can decipher his feelings. We can read a dog’s emotions through his body language. Www.ispeakdog.org is a great website that explores how we use body language to determine what a dog’s motivation is. He may be barking out of excitement but if he only barks at your adult son and not you, I would guess that is not what is going on. There may be some reason why he is afraid of your son. Since I don’t know what he looks like at other times when interacting with your son, I can’t say. He could be afraid of the visitors as well. Or he could be feeling territorial.

If he is barking with excitement, we need to work on getting him calm before we greet him when coming home. You can wait outside the door and wait for the barking to stop. Enter the house calmly and when he is calm and quiet, you can greet him. If he starts to bark, say “oops” and ignore. If it’s directed at guests, interrupt with your positive interrupter and move him into another room.

In general, I think it is best to put dogs away when someone comes in and allow them some time to calm down before attempting introductions if at all. Your dog is not going to need to meet every person that comes to the door. He may not want to. It might make him a lot happier to not have to meet them. I will usually just tell the person at the door, to give me a moment while I put my dog away. You can also put a note on the door that you will need to put your dog away so people will be patient.  Put the dog in a crate or in a room.

As far as barking on walks, again you have to find ways to prevent the behavior. That may mean walking during times when there aren’t a lot of other people. It may mean finding quieter places to walk. Sometimes it means turning other directions when you see someone coming or ducking behind cars.  Walking in a quiet location like a school may be the best way to go. Much less stressful and you both can actually enjoy the walk.

I would suggest teaching some distraction techniques for when you get into a situation where you can’t find a way to get far enough away. I personally like Find It as a distraction technique. It also gives the dog a calming behavior to do which can change his associations with his triggers. Drop a treat on the floor and say, “find it”. When the dog is eating that treat, drop more on the ground and keep saying “find it”. Play this inside the house and in the yard and then play frequently on walks when there is no trigger present. I also like the Emergency Recall for making a quick turn in a positive way so that you can move away from a trigger. To train this, walk forward with dog. Have a treat in the hand closest to the dog. When you see the trigger, drop the treat in front of his nose, say your verbal cue, “let’s go” and turn in the opposite direction, luring him along several steps. Most dogs find this quite fun so it’s a positive way to move them in a new direction.

I also recommend conditioning a dog to a positive interrupter. Basically, it’s a word that you classically condition to mean that when they hear the word, they will get a piece of food. You have to do many repetitions to condition the word before it can work while he is barking. I like to use “uh oh” as my positive interrupter because it is hard to say that in an upset tone. To condition the word, say “uh-oh” and then move your hand to feed the dog a treat. Repeat this many times. You know that he is starting to get the connection when you say the word and his ears perk up. The next step would be to practice during mild distractions. Set up a training scenario where the dog is looking away and distracted. Say your positive interrupter and when he turns his head to you, say “yes” and treat. Gradually build up the level of distractions. Finally, say the word while he is barking. If you get a moment of silence, say “yes” and treat. Build up on the duration that he is expected to be quiet before saying “yes” and treating

The way that you modify the behavior of barking at people and dogs is to find your dog’s threshold. That is the distance which he can notice a stimulus and not react to it. For some dogs, that is a long distance, but you have to figure that part out to work with it. When you find that point, you can say “yes” and feed a treat when he looks at the trigger and doesn’t react. Eventually, he should start to get the association of looking at the trigger causes you to feed him a treat. He will then start to look at you after he sees the trigger, when he does that say “yes” and treat. This helps to teach him to learn to look to you for guidance. It also is helping to expose him to the trigger at a distance he can tolerate and pair it with yummy food. You can also play a game like tug or flirt pole if he likes that. Another part of that is to give the dog time to notice his trigger and just look at it. If he isn’t reacting, then giving him time to look at things helps him realize nothing bad is going to happen.

Bark collars use positive punishment which means adding an aversive after the behavior occurs to make the behavior occur less often. There are risks to using aversives. Even those that seem innocuous work by scaring, startling or causing an uncomfortable feeling. Many dogs habituate to the punishment and it no longer works so you have keep upping the levels. They can also cause negative reactions to whatever the animal is looking at while they are being punished. It can classically condition them to a negative reaction to that stimulus.  People that use aversives are much more likely to report aggressive behavior in their dogs. If your dog leans more fearful, I would be concerned about using any type of aversive.

It’s a fairly normal reaction for a dog, especially a dog bred to hunt small animals to bark at them. He doesn’t know that they are pets and part of the family just because they are inside the house. It can take a month or more of introduction time to properly introduce some dogs and cats. That usually involves having the cats in another room and swapping scents for a while. Then we would do some visual exposure at a baby gate and reinforce calm, quiet behavior. If the dog is barking, then you need to get further away to work with him or go back to the closed door and work with him just hearing the sounds of the cats and the smells. Given how much work that would be, I would say to just put the cats in their own room or not bring the dog over to her house if that is not an option.

Be sure you are giving him enough exercise daily. He is a small dog but most young dachshunds probably would need at least 30 minutes of structured activity like walks, fetching, flirt pole, etc. He would probably love some sort of food hunting activities. My dogs love finding kibble I throw in the grass. You can hide little boxes with treats or toys around the house or yard. There are a variety of enrichment toys you can feed him out of. He can roll them around the house while food falls out. A tired dog is much less likely to be reactive so get creative about ways to tire him out.

I hope these tips will help bring the barking down a bit and in general help him to be a calmer dog. It can be complicated to work on these issues alone so you may want to consult a Certified Professional Trainer to help you develop a plan and coach you through it. Find one here: https://www.ccpdt.org/dog-owners/certified-dog-trainer-directory/ Good luck and happy training!

Tips for a Safe 4th of July