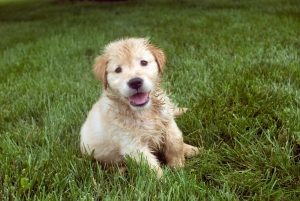 We have a 11-week Golden Retriever. She has not been potty trained and has never been crate trained. We’ve been trying to start crate training with her. Every time we have placed her in the crate, even for an hour, she defecates in the crate. We always take her out before putting her in. We put a chew safe toy in there with her, and she goes in without a big struggle. But when we return to her, she has defecated in the crate. What are we doing wrong?

Congratulations on your new addition! Adding a new family member is a stressful time when people have a lot of questions. I am so glad that you reached out. Luckily, puppies are little sponges for information so it is the best time to teach them what we expect of them and they learn very quickly.

The first item to explore is the size of the crate. Instinctively, we might give the puppy a nice big crate so that they can feel comfortable. Once the dog is housetrained, a large crate is fine. However, for potty training purposes we want to use a crate that is just big enough for the puppy to lay down, turn around and stand up. They make dividers for crates if you don’t want to have to keep buying new crates as she grows. The idea being that there is not enough room to get away from the potty mess so the dog will be motivated to hold it. There are some caveats to this; the dog cannot be left for longer than their body is able to hold it and/or if the dog was raised in a situation where they had no choice but to go to the bathroom in the crate. Dogs that aren’t let out of their crates often become what we refer to as “dirty”. This means that they no longer have the instinct to stay away from potty accidents because they have not had any choice.

To determine how long a puppy this age should be able to hold it, we add one hour to the age in months. A puppy this age should be able to go 4 hours typically. That is however a long time to ask a dog that is not housetrained to hold it so I wouldn’t expect that at this point. If you need to leave the puppy longer than she can hold it, I would suggest that you have the crate in a pen with the door open. Line the pen with puppy pads so that the dog has an alternative location to potty other than the crate. It may not be ideal but it is better than going in the crate. You can also confine her to a small area like a bathroom or utility room with the open crate and potty pads.

You may consider placing a camera in the room so you can see how long it takes her to have an accident and if she is offering any signals that she needs to be let out. We don’t want to be ignoring whining if we don’t know if the dog needs to go to the bathroom or not. We should only ignore the dog when we know they don’t need to potty and it is not panic related behavior.

A dog that is just learning crate training is usually not yet ready to be left alone for an hour. The initial stages of crate training are just about the dog going in and out of the crate on their own free will. We move through the next stage only when the dog is very happy in the stage we are at. I would suggest that you start over with the training.

I highly recommend that you put a crate in a common space that the family spends a lot of time in such as the living room. Many people only crate the dog when they need to leave or at night. This can lead to an association of being alone with the crate. Dogs in generally are not great fans of being alone so this can create a negative association. By training in the crate when you are not leaving, we can prevent that from becoming an association. It also allows for multitasking while you are training. Cook a meal and drop a treat in every once in a while. Watch tv and drop a treat in during commercials.

Feed her all her meals in the crate to create another positive association. At this point, leave the door open and put the food right in the opening of the door. Give her any special bones or treats in her kennel. Play fetch with her favorite toy that you only play with in the crate.

If you are just putting her in the crate for housetraining purposes, you may try the umbilical cord method instead. The dog wears a leash at all times and is attached to you. This keeps her from wandering off to go potty and keeps you from missing her signals that she needs to go out. Most dogs will start to act antsy, sniff around, circle, pace before they need to go to the potty. When you notice those signals, rush her outside to see if she needs to go.

Another very important step that most people miss is being sure that you always go outside with her and watch her. You have to be watching to know if she goes and to reinforce that with some super yummy treats and praise. Praise is not enough here; you need food as well. You must reward immediately within a couple of seconds for her to get the association of behavior and reward. We also cannot give her any freedom in the house unless we know that she is empty so that is another reason to watch her.

If you have a small crate and she is still going in the crate, the umbilical cord method is going to be your best bet here. When you need to leave her alone, place her in a pen with an open crate inside and potty pads on the floor. You may not be able to use the crate as a housetraining tool with her if she doesn’t stop going to the bathroom inside it but I would suggest giving it a try with these tips. Good luck!