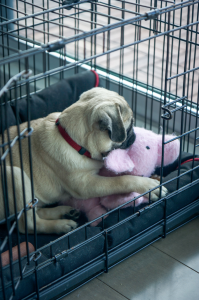 Our 9-week-old Cocker Spaniel puppy stays in a crate at night. We have been getting up twice to take him outside to pee and poop. We put pee pads in his crate at night, but he still occasionally has an accident. We are sleep deprived. But we know he has a small bladder and can’t hold his pee all night. Any suggestions?

I very much sympathize with you as the mom of a new puppy. Mine is 4 months old now so we have gotten past the housetraining stage, thank goodness. My puppy is a screamer. He woke us up every day at 4:30 am or 5:00 am to go outside by screaming. I still fondly remember the first day I was allowed to sleep until my normal wakeup of 6:30 am. Take heart, I know it is rough, but things will get better.

Crates are a fantastic tool for house training and preventing destructive behaviors. The concept being that dogs in general do not want to soil where they sleep. First, let’s make sure that your crate is small enough. Unfortunately, it needs to be small for housetraining purposes. The puppy should only be able to lie down, stand up and turn around. If you get a crate too big, the puppy can potty in one area and sleep in another. That defeats the purpose of the confinement. You can buy crates that have dividers to make the crate larger as the puppy grows.

The way that some puppies are raised prior to their families receiving them can cause them to become what we call “dirty dogs”. Those are dogs that have no issue with lying in their own waste. Most often these dogs have been living in small cages pretty much exclusively until getting their families. These dogs will need a pen with potty pads to teach them there is an alternative to pottying in the crate.

Unfortunately, the potty pads inside the crate also may potentially be teaching him that it’s ok to potty in his crate. A better solution if you want to use potty pads, is to use a puppy pen as well. Place the crate inside a set up puppy pen with a puppy pad down and have him sleep in there with the crate door open. That way if he needs to go potty, he can get up and potty outside of his crate. This will at least help to prevent him from becoming a dog that thinks it’s ok to potty in his crate. It won’t help with potty training, but you should be able to get rid of it fairly soon and go back to crating alone. I would say if he has had more than accidents three nights in a row, he should have a pen rather than only be in the crate until that resolves.

Another option would be to confine him in a small area like a laundry room or bathroom and use baby gates and puppy pens to make the space smaller. You would do a similar set up with a crate with an open door for him to sleep in and a potty pad or two on the ground.

Make sure to up any accidents with enzymatic cleaner so that the crate doesn’t smell like urine or excrement. It will cause him to have more accidents if it smells like urine or feces. You may try removing the bedding from the crate. Some puppies are attracted to soft surfaces over hard surfaces to potty on. 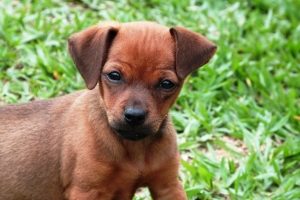 If you have a puppy that urinates outside and then immediately goes inside, I have a tip for that. Puppies do not have bladder control. That means sometimes they do not get it all out at once. A great tip is to let them stay outside a few more minutes after they go to make sure they don’t need to go again. This is also a good idea because some dogs start to delay going to the bathroom because they know they have to go inside right after. I usually like to let them play freely for a few more minutes so they don’t make that association. As your puppy gets older and he is forced to hold his bladder more, he will get more control.

My advice is going to be based on what is more important to you at this point. If you are concerned about training him as fast as possible, then the best action is to wake up and take him out in the middle of the night. If he has a particular time, he usually needs to go, you can set an alarm and take him out. If he is still having accidents, then set the alarm for an hour sooner and see if that helps. If you just really need to get a few nights of better sleep, then try the potty pad and pen set up. It is totally ok to just do what you need to do to survive for a few days. It is not going to make a huge difference in the long run.

The good news is that he is probably going to get better at holding it pretty soon. Every puppy is different but in general, most puppies only need to go out once a night once they hit 10 weeks or so. Now that is not to say for sure that will happen with your puppy, but I think it probably will. My puppy started making it all the way through the night at about 3 months so hopefully that will happen for you as well. Maybe your partner and you can take turns on whose night or turn it is?

Having a puppy is like having a new baby. They aren’t quite as helpless but pretty much so for a while. Potty training is simple in concept but hard in that it’s not always easy to do practically. Mistakes will happen but just chalk it up to that and keep plugging along. He will get there with consistent scheduling and keeping a constant eye on him. Good luck!