My 2-year-old springer spaniel has recently become very vocal around dogs in the dog park and on the leash. Specifically, with new dogs. She never gets physical but will continually bark at them. I have tried giving her treats when she meets a new dog, but she just continues to bark. I’m concerned that either she will eventually become physically aggressive or that the dog she barks at will get aggressive with her. How do I correct her of this behavior and make her experience walking and at the dog park more enjoyable for all? 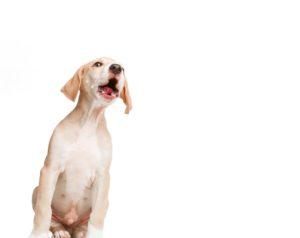 How you deal with the barking, depends on the motivation of the dog to bark. Without being able to see her body language, I can’t know exactly what the motivation for the behavior is. Since you are there and watching her, you need to look at what her body is telling you. Is she soft and wiggly? Is she offering play initiation behaviors? Dogs do bark at other dogs to initiate play but that would usually be followed by a play signal after the other dog looks at them. If it is more of a demand bark to get the other dog to play, I would remove her from the situation and walk her around until she calms down. She should not be allowed to approach another dog when she is barking or we are reinforcing that behavior and it will continue. When I allow two dogs to meet, I want both dogs to be calm and not reacting. If you allow dogs to meet in an over aroused manner the meeting will often not go well because tempers are up and one dog is likely to be rude and the other will respond with a correction. If there a stiffness and intensity to her to body, then my educated guess would be that she is not offering playful behaviors and there is a component of fear to her behavior. If it is a fearful behavior, rather than thinking of correcting it, I would suggest that you try to make her feel better about the situation so that she doesn’t feel the need to bark.

There are dogs that will bark at others on leash because they feel their movement restricted. If they are afraid and unable to get aware, they may react in a defensive manner. When a dog is afraid and they bark at something, let’s say the mailman for example, they bark to say, “go away”. Eventually the mailman does go away. The dog is then reinforced for the barking behavior because the thing that made him feel afraid went away. He doesn’t know that the mailman was going to leave anyway. If the behavior is fear motivated, the barking serves to tell the other dogs to go away. We need to change the emotion of wanting the other dogs to go away to stop the behavior. Simply suppressing the barking does not change the underlying emotion and the issue will likely rear its head again and possibly will become worse. Dogs cannot learn when they are in the emotional part of their brain. When they are in a reactive state they are in that emotional brain. In order to work with them to change their feelings about something we need to figure out what distance they can see the trigger without reacting. This is called the dog’s threshold. It is the point where they are relaxed enough to see the trigger but not go into the reactive state. This is the distance where we start working with the dog. I would imagine that when you are feeding her a treat for meeting another dog, she is already way past her threshold and the other dog is way too close. 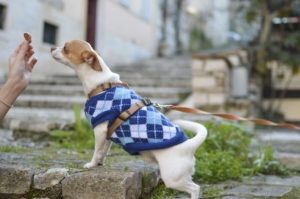 There are always a number of ways to work with any issue, but I will go into what is called “look at that!” technique which was popularized by author Leslie McDevitt in her book Control Unleashed. First, we need to establish a mark word which will communicate to the dog when they do the correct behavior. I like to use the word “yes”.  To condition the mark word, say “yes” and then feed a treat. I would do this for a couple sessions or until the dog’s ears perk up at the sound of the word. Once the dog knows the word, we can start the “look at that” training. Go to the park and find the distance at which your dog notices the other dogs but does not bark. When she looks at the dog, say “yes” and feed her a treat. At this point, you may need to put the treat right into her mouth. If she will not eat the treat, then she is likely stressed and I would suggest that you try to move even further away and see if you can get her to eat. Every time she looks at the dog, “yes” and treat. What should start to happen is she will look at the dog and then look at you. It is as if she is saying, “Hey mom! There is a dog over there. Where is my cookie?”. That is what we are looking for. This is the beginning of the connection that looking at other dogs mean treats. At this point, I would say “yes” when she looks at the dog but wait until she turns her head to look at you to feed the treat. This is also conditioning the dog to check in with you. We really need to teach our dogs to check in with us so that we can get and hold their attention when needed. As we work on the “look at that!” training we begin to work closer to the dog’s trigger as they are able to tolerate closer distances. Be aware that movement is also a trigger so your dog may be able to tolerate a dog standing still from one distance, but a moving dog needs to be much further away. In addition to the “look at that!” training, I would suggest working on some distraction games and attention games for those other times when you need your dog to not look at something. The game that has worked wonders for me is “find it”. It teaches the dog to search the ground for treats when you say, “find it”. If her nose is down in the ground searching, she won’t see the other dog walking by. I also suggest teaching a leash walking technique called “steady” that teaches the dog to come to your side and maintain eye contact until you release them. This teaches the dog to focus on you at specific times when you need them to not notice something like another dog. It also teaches the dog to walk nicely on leash and it is a very engaging way to walk with your dog.

I am wondering if at this point the dog park is really a good idea for your dog. I don’t really know exactly what is going on without seeing it, but I do know that allowing the behavior to continue is not a good idea. Anytime there is a problem behavior we need to think of ways to prevent the dog from doing that behavior while we work on the training separately. I would guess that if she likes to play with dogs she knows, she would do much better at a dog daycare where the same dogs come every week or making a weekly playdate with a friend’s dogs. Some dogs get overwhelmed with playing with too many dogs so she may be a dog that does better in a small playgroup. The other benefit of dog daycare is having professionals watch your dog interact with other dogs so we can get a better idea of what works best for her. I think if you don’t address this issue, there is a possibility that something is going to go wrong at some point. There are definitely dogs that are at the park that should not be and having another dog barking at them aggressively may set them off. I would really suggest that you consider making an appointment with a certified dog trainer.  Dog training as a profession is not regulated so certification can help ensure a level of professionalism and competency. You can locate one here: https://www.ccpdt.org/dog-owners/certified-dog-trainer-directory/  You want to be sure that you aren’t using any aversive methods with this type of training as it could likely make the issue much worse. The trainers certified by this council adhere to the Humane Hierarchy which prescribes the least invasive methods be used to solve a behavior issue.

Dogs are wonderfully simple and complex at the same time. I think there is a lot more going on with their interactions with one another than we humans are noticing. Above all we should respect when our dogs are feeling afraid and try to make things better for them. It sounds like that is definitely your goal and intention, so I hope you are able to figure out what it is going on and make things more pleasant for everyone involved.