I have an 11-week-old Bernese Mountain dog that lays down while outside when I am having her relive herself. She is between 25 and 30 lbs and will not get up to either finish her business or to go inside. I have tried treats and she will get up and then back down she goes because she knows she will get another treat. I stopped the treats and tried pulling on the leash and she will just let me pull her on the grass. If I try to pick her up to stand her up, she rolls over on her back and she bites. Not hard, but hard enough. I have been working on her normal puppy biting with her since 8 weeks of age. I am not sure how to get this under control. 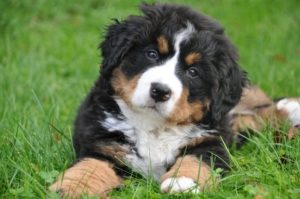 People usually complain of the opposite problem of dogs pulling on leash. Most people don’t realize that puppies putting on the brakes is actually a fairly common problem. There are a few different reasons why a dog may not want to walk. It may take some time to try some different techniques or to identify the possible trigger of the behavior. When analyzing a behavior problem, we always look at what the trigger is, what the behavior is and what the dog is getting from the behavior or what is reinforcing that behavior.

We can start with looking at the equipment and make sure that it is not causing her fear or discomfort. Puppies do need time to get used to the weight of the leash and the restraint of it. I would start over with getting her used to the weight of the leash. Let her drag the leash around the house for a few days. Next, work on having the leash on being a positive thing. Try playing some training games with her while she is wearing the leash. Pick the leash up and feed her a treat for a while. Next, call her name and when she comes over, say “yes” and feed her a treat. Toss a treat away from you and when she goes to eat it, call her name again and say “yes” and treat when she comes back. You can play this game with her kibble as a great way to tire her out.

Fear is one of the most common reasons why a dog will stop moving. Many times, there is something in the environment that the dog is afraid of and they will stop moving at the same point every time. Start trying to pay attention to when it happens and where. Are there any sounds or people out? Do you have to go up and down stairs? Does it happen at all of the time or is it at a particular time of day? Do you always try to use the same door? You could try mixing things up by exiting a different door, walking a different route or walking different times of day. If it is fear related, we need to figure out what the trigger is to make the dog feel better about the situation. For puppies, the issue is often lack of exposure to new stimuli and they can get overwhelmed. In this case, try a quieter time of day outside if you can and let her take her time. I don’t know how long you have had her, but some dogs take time to get comfortable with the new environment.

It could be that she enjoys being outside and doesn’t want the fun to end. Many times, when people are housetraining, as soon as the dog goes to the bathroom, they make it go inside. The dog learns that as soon as they potty it is a cue that they are going back in. They begin to delay going to the bathroom, so they don’t have to come inside. To combat that, let the dog walk around or play outside for a few minutes after she potties. When she puts on the brakes, turn around and ignore her until she makes movement forward and then say “yes” and treat. Also, be sure she is getting plenty of outside time to play and run around outside of potty breaks so it’s not the only time you go outside. 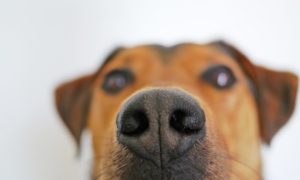 There are some different training techniques to encourage the dog to move or to reinforce movement. Try teaching a target which teaches the dog to move towards your hands. It’s how they teach animals in the zoo to come close enough for blood draws so hopefully if it works with a lion it might work with your puppy. Practice inside the house outside of the context of the situation. We are reinforcing the dog for touching their nose to our forefinger and middle finger. I will usually rub some smelly treats on my fingers to encourage the dog to sniff my fingers which will cause them to touch them. Hold your fingers about a half an inch away from the dog’s nose. When she touches your fingers, say “yes” and feed her a treat from the other hand. Keep the distance short initially and then slowly start to work on moving your fingers further away.  Once she has learned the behavior inside the home, you can start practicing outside. Hopefully, if she really enjoys it she will be motivated to play that fun game and it will help get her up and moving towards your fingers. Once you get her up, say “yes” and treat for any she movement forward. Toss the treat in the direction you want the dog to move rather than feeding it to their mouth. That will encourage additional movement. You can even add a cue to it by saying, “let’s go” the moment before the dog moves. Luring with a treat can backfire because some dogs will stop and lie down in order to get you to give them another treat. Instead we should focus on reinforcing movement forward of the dog’s own accord. If you start working on training with her, she will likely start to enjoy that, and you may be able to get her moving by doing training before you even start walking. Bring your treats with you and have her do a few different cues at the door and as you start to walk. You may be able to keep or get her attention if she knows that training is something that happens on walks. The majority of dogs trained using reward training really enjoy that training.

We should avoid constant pulling on the dog’s leash when trying to get them to move. She may be light enough to drag at the moment but that is not going to be true for long. When she gets larger, the constant pressure on the leash will likely make her pull in the opposite direction. We call this oppositional reflex. This is the reason why we don’t want to use back connecting harnesses with dogs that are strong pullers, they pull even harder against our pulling back. You may try a quick light tug and release. Face the opposite direction and give a quick tug and release. This isn’t a correction just a light tug which may cause the dog to get up.

Dogs use body language to communicate with each other and with us. A number of signals are meant to cut off social interaction. Most people associate a dog rolling over onto its back as a request for a belly rub. Of course, there are times when dogs want a nice belly rub. A rollover when its coupled with an interaction that a dog is uncomfortable with is called a tap out. It usually happens very quickly, and the body language is stiff in comparison to a belly rub request which is a more loose and relaxed movement. A tap out is meant as a warning to say that the dog really wants you to stop. I always take these very seriously and stop doing whatever I was doing which caused the reaction. We need to work on the reason why she feels the need to tap out and avoid causing any further bites by trying to pick her up. This definitely doesn’t fall under puppy biting and it is concerning behavior. I highly suggest that you consult a Certified Professional Dog Trainer at https://www.ccpdt.org/dog-owners/certified-dog-trainer-directory/ . It would be a great idea to have a professional take a look at her behavior and give you some more ideas of how to work with her.

This behavior can be so frustrating, but it is going to be important to be patient. Knowing that she is behaving this way, you should give yourself plenty of time for potty breaks. Bring your phone and check your emails or listen to a podcast. Try to think of some way to entertain yourself while waiting for her to move. It does no good to get frustrated for either of you or could cause harm if she becomes fearful of you. I do think this issue will resolve with time, but it is great that you are going to start working on it now before it becomes an adult habit.

Want more training for your animal? Sign up now for the first session of 2020 Manners 101 classes here!