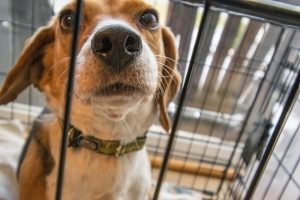 We recently adopted a puppy who is now four months old. She is doing really well with house-training and not chewing. Our only issue now has been crate training. She was going into the crate on her own and taking naps with the door open. It wasn’t until we started shutting the door and leaving her that she now will not go in. We do put her in the crate at least once a day with a Kong. This week, we’re trying to put her in it twice a day. She will eat most of her treats but she doesn’t settle. She rarely whines or cries but I’m finding that she is drooling a lot. I keep the crate in my office. I’ll leave treats in it throughout the day but if they are back far enough, she won’t get it. Weeks ago, she would eat her meals in the crate with no problems but since we’ve been putting her in more often, she now whines and is reluctant to go in to eat her food at first. I think it’s a separation issue so I don’t know how we make that better. Any suggestions?

It can be hard to say what is causing a behavior initially. A lot of times, trainers work through a series of different techniques to see if we see any improvement. As we see what works and what doesn’t, we often get a better picture of what is causing the behavior. My first guess is that she associates the crate with being left alone which she may find averse. The drooling and inability to settle down does indicate a level of stress. We don’t know for sure if the stress is cause by being left alone, crated or something else. 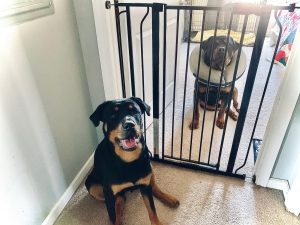 You could start by confining her to a small room like a bathroom or utility room to gauge her stress level at being left alone in a different space. Some dogs do better if you put a baby gate up rather than shutting the door. Smaller dogs can be put into a puppy pen which has an open top and often serves as a good confinement option. If she has stress at being left alone anywhere, then work needs to focus on creating a good association with being left alone. You may need to utilize other options like dog daycare or pet sitters when you need to leave home until she feels better about being left alone.

If the stress is part of generalized anxiety or if the stress were extreme, such as the dog hurting itself to try to escape the crate, then I suggest consulting a Veterinary Behaviorist. True separation anxiety is quiet distressing and can be dangerous for the animal.  It sounds like while she is distressed, the stress level is low enough that you should be able to work on this issue.

If she won’t approach the crate willing any more then I suggest starting over. The goal with crate training is teaching the dog to enter the crate on their own without being forced inside. Try sitting near the crate and mark with a clicker or verbal “yes” and treat the dog for walking as close as they are willing to come. Toss the treat behind the dog so that they can get some distance and have some of the pressure taken off. It sounds counter-intuitive but if the dog is afraid of something, allowing it space away from that trigger is reinforcing for them. As you practice, she should begin to come closer to the crate. Continue to toss treats away from the crate even as she begins to get inside the crate. That will also set up more repetitions to go in and out of the crate. 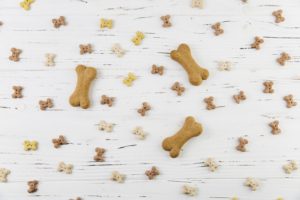 To build some drive to go into the kennel, there are a couple games you can play. Find whatever her favorite chew treat is. Maybe it’s a bully stick or knuckle bone, it should be something really special. Let the dog see you put the treat in the crate and close the door.  Give her some time to try to get at the treat and then open the door to let her get it out. Another game is to toss some amazing treats in the crate and close the door and hold your dog back. Wait until she is really excited and then release her to get the treats. We don’t need to worry about closing the door at this point. We are just working on building up some drive to go into the kennel.

Once she is comfortable going in, the next step is to build duration inside the crate. To build in duration, train in a similar way as you train a stay. I usually would start with a short duration of 8-10 seconds with a treat delivery rate of every 2 seconds to start. Then give the release word and let her out. Let her take a break and ignore her for a bit. I only reinforce during the stay. Once you release the dog, you don’t need to give any treats. The release is reinforcing enough. What I find is most dogs don’t want to get up out of the stay. It’s the easiest money they ever made! Practice a lot and slowly build up your duration and slowing down your delivery rate.

You can build up distance in a similar way to a stay as well. Take a step away and return to treat, slowly increase the number of steps that you take away from the crate. Walk out the door and come back and treat. We want to build on each step of the way slowly.

We need to make sure that we aren’t always putting her in the crate and leaving her alone. Sometimes when she goes into the crate, you stay in the room with her. If you can afford it, you may want to have at least two crates. If you put one in a family room, then you can easily practice having her inside the kennel while you are in the same room. Make frozen Kongs to give her any time you are putting her in the crate. You can feed her meals this way so you don’t have to worry about overfeeding. As soon as she is done with the toy, let her out. If she has trouble sleeping in her crate at night, I always suggest moving the crate into the bedroom and see if that helps. Dogs are social creatures and prefer to sleep near the rest of the family. Some dogs don’t mind of course but if it’s a problem, it often helps. 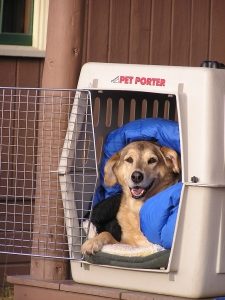 Be sure that in addition to this training, your dog is getting enough exercise and mental stimulation. It can be helpful for anxiety to make sure that the dog is getting plenty of opportunities for enrichment. Puppies are more limited in the amount of exercise they can do safely so remember the Five-Minute Rule. That is five minutes of exercise per one month of age twice a day. At this age you can walk her 20 minutes twice a day. It might even be a good idea to walk her before putting her in her kennel so that she is more likely to be able to relax.  This is where adding in enrichment feeding and training is so helpful. This will add an additional layer of energy burn.

If you put in the work and she still continues to experience stress at being crated, I would suggest that you forgo the crate for confinement in a small room. It sounds like you have a pretty good handle on the housetraining. Once she gets passed the destructive stage, you may find that she is fine if she is allowed free roam of the house. For some dogs, the issue is more about confinement than separation. If she shows signs of stress at being left alone even if left loose, I would suggest contacting a behaviorist or trainer that specializes in separation issues. These problems can be complicated and difficult to treat. Behavior problems tend to get worse with time if not addressed. I hope you find the solution that works for you.

May Print Newsletter
Scroll to top