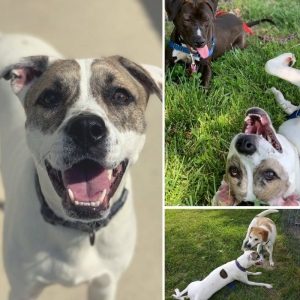 Casper the friendly ghost dog may look all smiles, but lately he’s been feeling pretty down in the dumps. Poor guy has been adopted and returned twice now – the first time when his family had to move out of state and couldn’t bring him along, the second time when the landlord said he was “too big” and had to go (he’s really not that big, but ok). He finds the shelter to be a pretty stressful place, and is really hoping he’ll find that special home soon that will love him forever. With all his great qualities, it shouldn’t be that hard, so listen up!

Casper, as mentioned before is actually a great size at about 45 pounds. He’s a year old, so still has lots of puppy energy, which he’s been known to channel into play sessions with other dogs. Though a bit unsure about his new doggy friends at first, once he gets going, he never wants to stop! Casper lived with cats in his first home, who he was reportedly friendly to, as well as older children. He’s house-trained as long as he’s getting regular potty breaks and crate-trained too…shall we go on? He knows sit, has respectable leash manners and isn’t mouthy; he’s goofy and affectionate and has the cutest bandito mask this side of the Mississippi. We think he might be part three toed sloth, but it’s hard to say for sure.

Friends, it would make our month to see this very deserving pup find his happily ever after. Please help by sharing, or if you are looking to add a new family member to your home, considering coming in to meet Casper! His adoption fee is discounted and his bags are packed and ready to go!

Ask Crystal: One Puppy or Two Puppies Too Many?

Ask Crystal: Not Digging a Digging Dog
Scroll to top