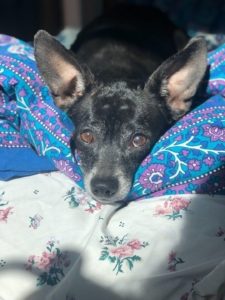 Punky was surrendered to our county shelter due to housing issues and had a terrible cherry eye. Initially when we pulled her we just expected to pay for that surgery but then we quickly discovered she had other concerns as well. Punky had to have bladder stones removed that probably wouldn’t have been found if she didn’t come to our adoption center. Allison fell in love with Punky and although she is her first dog, she couldn’t leave her behind. We did a lot of counseling for Allison and Punky and despite the possibility of having more health concerns down the line, Allison knew that Punky belonged in her life. Allison recently sent up the following update:

“I’ve been meaning to send an update on Punky! I adopted her in August and she had some health issues (her eye was healing from a surgery and she had also just had a huge bladder stone removed) and within a few weeks of having her she was like a brand new dog!

When I adopted her I wasn’t sure how active she would want to be, but now hiking is her favorite thing to do! She was also really apprehensive about other dogs at first, but recently we went to the dog park for the first time and she had a ball.

She is so sweet and literally the perfect fit for me. I love her so much! Thank you for bringing her into my life!”

Thank you Allison for giving Punky an amazing Happy Tail and a loving, active, happy home!