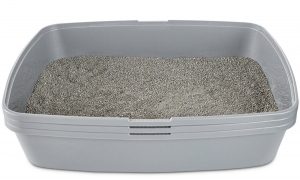 We have a feral cat that has become an indoor cat. She seems to be adjusting well to indoors except she doesn’t like the litter box much. We have two in the same area and she will use one to pee in but poos on the floor instead of the box. She never pees outside of box. I have tried to put some litter attractant in box and it did not make a difference. She was going outdoors for her business initially after she became an indoor kitty. We also have other cats in the house.
Any suggestions?

There are many reasons why cats have litterbox issues. It is also one of the main reason why people relinquish their pets so I am so happy that you are reaching out to try to solve this problem. Hopefully, with some changes we can get her on the right path.

First, it is important to make sure you rule out any medical conditions. If you haven’t taken her to the vet yet, I would suggest that you make an appointment. She could be having gastrointestinal problems that are causing this behavior. My kitty that was having constipation had on and off, defecation outside of the litter box until the medical issue was resolved. All the behavioral work isn’t going to help if your cat has a medical problem.

You can try laying down aluminum foil on the areas she soils to prevent her access or block it off somehow. The goal being to make that area unattractive to the cat.

Clean the area where she soils thoroughly with an enzymatic cleaner like Nature’s Miracle. Do not use vinegar or ammonia to clean pet messes. If the area is dry, wet it with lukewarm water and blot as much as possible. Treat the area with enzymatic cleaner. Repeat this process three times. 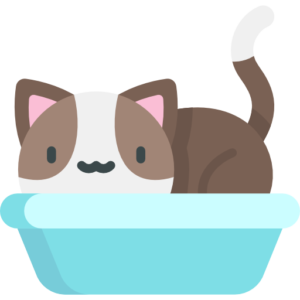 There are a lot of potential issues with litterboxes that can cause house soiling accidents.  While I do not know how many cats you have, if you only have two litter boxes then you don’t have enough. You need one box per cat plus one. You also want to put the boxes in different places. We don’t want to have all the boxes in one place. Sometimes cats will block the other’s access to different areas, so they need to have different options for locations. Many cats need the box to be in a quiet location and facing the door so that they can see around them. You don’t want the cat to feel trapped. The boxes should also be far away from food and water bowls. Don’t place the boxes near noisy appliances.

Next, they often have substrate preferences. It could be that if she is used to going outside, she may prefer dirt or sand. Try a couple of litterboxes that have dirt and one that has sand. If she likes that, then you can gradually start putting litter in that box with the sand or dirt and slowly transition her. You can also look at where she is having her accidents and try to replicate that in a litter box. If she likes going on the carpet, you can use carpet remnants. If she likes tile, leave a bare box. For the actual cat litter, use fine grain, soft litter rather than litter with large pieces like crystals or pellets. Slope the cat letter so that it is about 3” on one end and ½ inch on the other end. This will help you figure out the depth of litter she prefers. Avoid box liners, most cats do not like the plastic and end up ripping it up.

Cats tend to prefer uncovered boxes so if you have covered boxes, try removing the lids. Some cats like larger boxes. The under the bed sterlite storage boxes work really great as litter boxes. Some cats prefer smaller boxes. It’s all about experimenting and seeing what works.

Cats also get stressed out pretty easily. The fact that she is new to your house is definitely a stressor. Living with new cats is very stressful especially for cats that can be very territorial. Think about ways to reduce her stress level.  Feliway has a multi-cat diffuser, collars and sprays you can use to try to reduce her stress. Do you have plenty of vertical spaces and hiding spaces? It helps to reduce the cat’s stress if they have options to hide or get up high and watch things. If the cat is particularly nervous, you can build little tunnels out of boxes and other materials so that they can move to different areas and still feel safe. Consider adding tandem playtime with the feather wand with the other cats to help develop more positive associations with each other.

Try making these changes and give it a few weeks to see if there is a change. If she doesn’t have anything medically going on and the changes don’t help, seek out a certified cat behaviorist. You can locate one here: International Association of Animal Behavior Consultants (iaabc.org) Don’t worry if there isn’t one right near you, most of them will do video consults.

Hopefully, this is just a matter of letting the cat settle in and trying to figure out her litterbox preferences. We obviously don’t want to be ignoring the behavior but we should also understand that change can take time. Good luck!