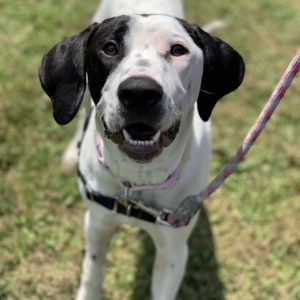 We adopted a 3-year-old male hound mix a couple of weeks ago. He is a very sweet dog and we love him very much. We are having a few issues that we would love to get some help with. The shelter told us that he has shown some resource guarding there and we have had some incidents with that. He has gotten into a couple scuffles with our other dogs. One where a bone had been hidden in some blankets and another where he was in the kitchen with our other dog. He also is very pushy around food with my son. He is also a counter surfer which has been challenging.

Congrats on your new addition! It’s very normal in the beginning to have some behaviors that need to be worked on. Most of the dogs that end up in shelters haven’t been given much in the way of skills for living in homes. If they had, they would most likely not have ended up in the shelter. It’s no fault of their own and we can teach them what it is we want them to do. They have no way of knowing and many of the unwanted behaviors we see are quite normal behavior in a dog.

The fact that this dog is new to your home and was in shelter environment tells me that he probably is experiencing a higher stress level than normal. When stress builds up, it causes dogs to react to triggers more quickly, have a more severe reaction and take longer to recover. We recommend a decompression period for newly adopted animals.

Decompression means a period where we try to keep the dog’s life as boring as possible to reduce exposure to stressors, good and bad. Practically this means not introducing to anyone that doesn’t live in the home, no new animal introductions, no dog parks, pet supply stores, vet visits, etc. The dog should stay mostly in the home and the yard. A room in the house that can be separate from the other animals and quiet is ideal for the new dog. If that dog doesn’t want to be alone in a room, can you put the other dogs in a room so that they can have some time apart?

There is no set period of time when a dog will be done with decompression. The amount of time it takes will vary from dog to dog. I have personally noticed that young confident dogs have a much shorter decompression period than a dog which leans more to the anxious or fearful side. We look to the animal’s behavior to tell us when they are ready to move out of decompression. They should be readily engaging with you. Eating, drinking, sleeping and pottying normally. At this point, we should begin the introductions to the other animals in the house. We can also begin some training exercises and start working on teaching the dog some skills. We cannot work on a behavior modification program until the dog has moved out of decompression and feels safe.

Create a management plan for your dog. This will keep your family safe and prevent the dog from practicing the behavior. If you are working on crate training, you should feed the dog in his crate with the door open but the door to the room shut. This will keep him separated from the other animals and help him to feel safe while eating. When he is done eating, call him away from the crate and get him out of the room. At that point, you can retrieve the bowl. It is important to note that some dogs will guard the empty bowl so it’s best to be cautious.

If you are not working on crate training, another safety measure is to have the dog on a tie down for feeding. Have him sit and wait and move away before releasing him to eat. When he is finished call him away from the bowl and untie him.

Keep him out of the kitchen when you are preparing food. You may be able to use puppy pens or baby gates to block the area. An easier solution can be to have the dog on a tie down near by but away from the food. Place a bed or mat there and toss treats to him as you prepare food. Keep the other dogs out of the area or also on their own tie down. You can also crate him or keep him in another room. Do this when anyone is eating as well.

A place cue will be really useful training for these situations. A place is a stay on a location like a dog bed. The dog goes to his bed and stays there until released. Start by teaching the concept of stay. Think of stay as an extended position at this point. Most dogs don’t understand holding positions for long periods until trained. Start by working on duration and treat delivery rate. Start with a 10 second duration and a 2 second delivery rate. Lure the dog into a down. Feed treats on the ground between his paws so he will be less likely to get up to get the treat. Release at 10 seconds with your release word. Ignore the dog so that he understands the reinforcement only comes when he is in the position. If the dog gets up, put him back into the position and wait a couple of seconds to start treating again.

If he gets something that he should not have, if it’s safe to eat, at this point I would suggest just letting him have it. If it is something that would be dangerous to eat, toss a high value food like cheese away from the item so he moves away from it rather than trying to grab it from him. Do not reach into his mouth or touch him when he has something.

Teach him a trade cue. Start with a low value item that he is not likely to guard. Approach him and toss a treat so he begins to feel that someone approaching while he has something is a good thing. The next step would be to add a verbal cue to the behavior. Say, “Can I have that?”.  Reach for the item as you toss the dog a high value treat. Give the item back to the dog. We want the dog to know that sometimes we will give the item back. Slowly work your way up to more valuable items as you work through the training.

Dogs guard things because they fear losing them. This can be caused by well-meaning owners who are told that you need to take away a dog’s resources to get them used to it. This in fact can cause the guarding behavior. Rather than just taking the resource, we want to drop a treat as we walk by to teach the dog that a human approaching their food is a good thing.

The basic process behind modifying the food guarding is to toss a high value item to the dog while he is in possession of his food bowl. Slow feeders work well for this training since it takes longer for the dog to eat. Start out with the dog on a tie down or behind a baby gate. We must determine how far we need to start away from the dog based on at what distance they begin to react. We need to stay under that threshold and toss the treats from that distance. Walk by and toss a treat, repeat many times. Over time, you should be able to close the distance. We are looking for the dog to start lifting his head from the bowl in anticipation of the treat. That means that he is getting the connection and it also means he is becoming able to leave the food bowl when you approach.

Eventually, we can walk right up to the dog while he has the bowl. He should lift his head and we toss a treat in the bowl. We start gradually changing our body posture so that we begin bending more and more over the bowl as if we are about to pick up the bowl. Once the dog is comfortable with that, we combine the trade cue and picking up the bowl and then giving it back with some treats in it.

Food aggression amongst dogs is a normal behavior. The level of difficulty in managing it is influenced by how many things the dog guards, how fiercely he guards it and how the other animals react to his guarding. If he guards any sort of food or treasured item, that makes it a little more challenging than a dog that just guards his food bowl for example.

There is a normal aggression ladder that a dog will work his way up. Some dogs may skip some steps and escalate more quickly than others and that would make the situation riskier. The other factor being how adept the other dogs are at reading his body language and how fiercely they are willing to protect their possession. This can also be different from day to day. Dogs will often have more of a reaction to something if they are very stressed or potentially less of a reaction if they are tired and don’t have enough energy to care.

Guarding amongst dogs can be a management only situation. Many dogs will defer to the other dog and in those cases the behavior can be managed easily. However, if one dog is socially inept and doesn’t read the dog’s signaling and fights break out or if the dog guards every little crumb on the floor, the prognosis is more guarded and behavior modification may be necessary.

Lastly you would be giving the guarder a toy or bone and tethering him. Repeat the same process as above. Gradually you move closer and eventually you can do the training without tethers.