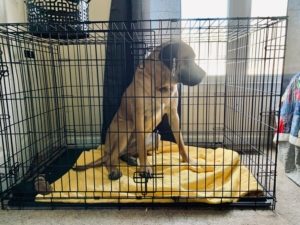 I have a 6-month-old puppy. He will be calm and collected in the crate as long as he sees me or my partner. If he doesn’t see any of us, he will begin to bark nonstop. He also is very destructive with anything we give him to keep him busy in the crate. I honestly don’t know if he has separation anxiety or doesn’t enjoy being in the crate. It could also be a mix of both.

Crate problems seem to be one of the biggest hurdles people experience with their new dogs. The animal training world loves to tell people that dogs are denning animals. It’s no surprise then that dog parents often seem quite confused as to why their denning animal does want to be in its den!

Dogs are actually maternal denning animals. The mother in the wild will create a den to give birth and raise her pups until about 8 weeks. After that they move to a more open nest and the pups go out to explore more. Most puppies born in homes are not raised in a den like environment. This may explain why we actually need to do crate training because it is not a natural behavior for most dogs.

If a crate is not a den, then what is it? In the Handbook of Applied Dog Behavior and Training Procedures and Protocols by Stephen Lindsay, he says, “The crate would not be a home, nor would it be a den, but more appropriately would simply be a place for confinement”. Confinement is a necessary thing especially with puppies that are not trained. It should just be understood that the crate is not a natural place for a dog so there is a training process to create a positive association that can take some time.

We need to first rule out that your puppy has had the proper training to have a positive association with the crate and being left alone in it. If he is barking when left alone in it, it is very likely that the puppy does not yet have a positive association with the crate yet. Provide an alternative confinement area to leave him in when you need to leave him alone until you have completed the crate training. This could be a bathroom or utility room with a baby gate or a puppy pen. 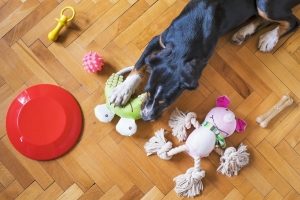 We want to make the puppy’s crate like an amusement park to help create that positive association. Feed all his meals in the crate. Sit in the room with him while he eats or put a crate in the living room with you. Feed him any special chews only in the crate. If he has a special toy, only bring it out during times when you play fetch with him inside the crate. Toss the toy in the crate and have the dog give you the toy and toss it back in. He can sit and play with it in the crate but the toy goes away when he is done. Play training games like puppy sit ups which is practicing sits and downs.

The first steps of crate training are to get the dog comfortable with going in and out of the kennel on their own. We then work on shutting the door. Next steps are getting the dog used to being in the kennel with the door closed while you are in the room.

Once the puppy is going in on his own, and seems completely comfortable in the crate with the door closed you can start working on getting him used to you being farther away and eventually out of the room. This protocol is good for any new dog to prevent separation distress and works on mild cases of separation issues.

Here is a step-by-step protocol for getting your puppy used to be alone:

Be sure to proceed through each step only when the dog is comfortable. It’s better to do short successful sessions 5-10 minutes are way better than long sessions than end in frustration.

Lack of exercise and enrichment also plays a big part in behavior problems in dogs. Most people are not giving their dog enough exercise and that can contribute to anxiety. Usually, when I asked people what exercise they give their puppy or dog, it’s a couple of 20-minute walks a day. That is not going to be enough for a young dog.

The right amount of exercise for your puppy will vary on the individual puppy. You will have to experiment and see what seems to work. If you have access to a large field, try a decompression walk on a long line over a neighborhood walk on a short leash. Schools after hours are a great place to walk your pup. Sniffing is a species-specific behavior that helps calm dogs down. 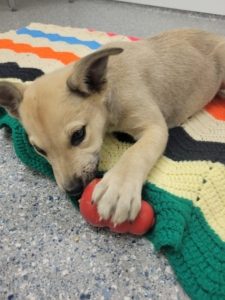 You may want to give your dog some exercise before putting him in the crate. Give him some time to calm down first. Ignore the dog for 15 minutes or so and then put him the crate. Give him an enrichment toy that he can lick at like a Licki Mat or frozen Kong. This will give him something to do and licking is another species-specific behavior which is soothing. It can teach him how to self soothe.

Start using your dog’s food as a way to engage them and tire them out. A bowl is a wasted opportunity. Put half of your dog’s daily rations in a Kong with can food and freeze it and put him in the kennel to eat it. Use the other half for training throughout the day. You can use it on crate training or any other behaviors that you want to reward. Training is another great way to tire a dog out. If he is tired when you put him in the crate, he is much less likely to be fussy.

If he is being destructive in the crate, forego any bedding for now. We don’t want him to ingest anything he should not. There are many toys that are made for heavy duty chewers. Goughnuts and West Paw toys are made for the heavy-duty chewers and they offer guarantees on their products. The black Kong is heavy duty rubber for his enrichment needs. If he tends to eat pieces of toys, then don’t give him anything unsupervised.

Hopefully, you can get through these steps in a few weeks with some diligence. Putting the time and work in now is well worth it for preventing future problems and if he does have a little anxiety at being left alone, this training should help with that. Good luck!