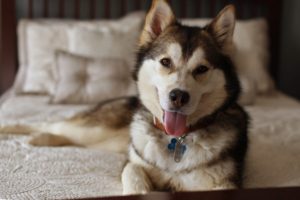 We rescued a male husky two days ago from our local humane society. His history is largely unknown, but he is underweight and extremely timid and jumpy.

We did a meet-and-greet with our female husky prior to adopting him which seemed to go very well. After bringing him home the first day, he seemed to relax some. On the second day, we spent a lot of time outside with a female husky with no issues. He seemed much more relaxed, came up to us for petting and brushing, and even became playful with me toward the end of the day.

On day three, however, he seemed jumpier and skittish. After some reassurance, we were able to coax him outside and petting a few times. There was one instance that morning when he growled at the female dog who was being obnoxiously playful. We gave him some space for a bit and the rest of the day seemed to go fine. That afternoon, however, he and the female dog were sniffing one another when he suddenly loudly growled at her. She growled back and the next second they were snarling and laying into one another on their hind legs. I quickly separated them and neither dog was hurt but the rescue dog was trembling. We kept them apart until bedtime because I was afraid to let them interact for fear of one of them getting hurt.

I don’t know if this is normal for the adjustment period or if rescue is still uncomfortable in our home and frightened. A female dog can be a bit much sometimes so I’m afraid she will continue to invade his space and not back down from his growling. I’d hate for the rescue dog’s fear/timidity to worsen due to altercations with the female dog. Is there anything i can do to help them get along or to help the rescue dog feel safe with the female dog? Also, is this just part of adjusting or does he need more intensive help?

Dogs Not Getting Along

Dear Dogs not Getting Along,

The adjustment period when bringing a new dog home can be much more stressful than most people expect for dogs and humans alike.  I do think I can offer some suggestions that may be helpful in helping your new dog to settle in and hopefully in turn help the two dogs’ relationship.

You mention that the new dog is skittish. Dogs that are fearful often take longer to settle in and can require more quiet time than a more confident dog might need. I would guess that he is still uncomfortable and not settled into your home yet. We recommend giving the new dog time to decompress in the home before attempting dog introductions. Rescues are coming from a really stressful situation into another stressful situation with no break for their stress hormones to come down. We refer to this as trigger stacking. One stress builds upon another and so on. This makes the dog more reactive to stimuli and they may have stronger reactions than they would normally have to a trigger. Think back to the worst time in your life and I bet you were more easily set off by things than you would normally be. That is what this dog is experiencing.

Every dog will have differing needs for decompression. You have to work with the dog in front of you. Let the dog tell you what he needs. Some dogs need quiet time alone, others might need lots of pets and snuggling. It is a bit of trial and error to find out what helps.

Rather than looking at some arbitrary set amount of time for the dog to settle in, let the dog’s behavior tell you when you can move forward. The behaviors we are looking for are the dog eating normally, exploring the environment comfortably and seeking social interaction with you. Start encouraging the dog to explore its environment more at this time. You can play Find It to encourage sniffing and exploration. At this point, the dog may be ready to try some introductions.

Many dogs will feel more comfortable with other dogs outside than inside. They may have positive associations with being outside or it may be more related to the feeling of open space versus confined spaces inside the house. For this reason, it is always better to start introductions outside the house rather than inside.

One of the other things I look at is when one dog issues a correction, is what the other dog’s response is. Ideally, when one dog corrects the other with a growl, the dog being growled at backs off. If your female responds with aggression to a correction consistently, that could be an issue potentially. The polite thing for her to do when he growled at her would have been to turn her head away and move away. She is likely also feeling a great deal of stress which is likely affecting her behavior.

It could potentially be a mismatched energy level between them but it is too early to know that. Dogs that are feeling fearful are not usually able to play. It is one way we can judge how the dog is feeling. It may be that he just doesn’t feel safe enough to play yet but will be able to once he feels safe and relaxed.

I would suggest contacting a trainer to help you with this introduction after a decompression period for the new dog. You want to prevent problems as much as possible to avoid further altercations. It’s not abnormal for two dogs to get into a scuffle but we should work to avoid putting the dogs into a situation where they feel it is necessary to threaten each other. Locate a Certified Professional Dog Trainer here: Certified Dog Trainer and Behavior Consultant Directory – CCPDT

Remember that behavior is not linear. Some days will be good and some bad. We don’t get a state of constant improvement. There is hope that these two dogs can get along but it may not be as easy as you had hoped. It is well worth the effort put into the training. Rescue dogs have been through so much and they deserve all the patience and effort we can offer them. Good luck!