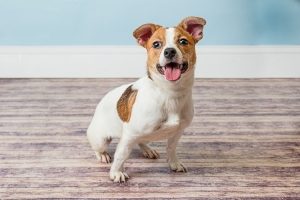 We have a nine-week-old corgi puppy. She is biting constantly. We are trying to stay calm and positive but she is drawing blood. We try to distract her with bones or go outside. We have had her for 2.5 weeks and she is only getting worse. Any suggestions? I know it will take time and she left her mama before learning manners. I don’t want to yell and get angry. It’s hard when your hands are all bruised. It is worse with me and she barks at me so I think she is trying to be alpha. We are trying to reward good behavior but it lasts only seconds.

Oh boy! I have been there many times and it is not fun. It’s definitely one of the parts of having a puppy that people seem to forget, kind of like forgetting the pain of childbirth. We call this behavior mouthing to distinguish it from biting which refers to aggressive behavior which is meant to threaten. It does take some effort for this behavior to improve.

Dominance is a concept that is widely misused and misunderstood by the public to the great detriment of not only dogs but humans and additionally, their relationship with their dogs. Unfortunately, it has been perpetuated by certain TV personalities that are very charismatic but not knowledgeable about dog behavior. The term dominance refers to priority access to limited resources. It only applies to resources and it doesn’t involve humans. It’s a dog-to-dog term. It also varies day to day and resource to resource.  Research shows that wolves are not dominated by an alpha that is the most aggressive male of the pack. They are organized like families and there is little aggression or fights for “dominance”. Additionally, dogs are not wolves and while they do share some behaviors, we cannot explain dog behavior using wolf models. Using dominance as an explanation for behavior is not only incorrect but also completely useless in solving behavior problems. If dominance is a personality trait, there is no fixing it so there is nothing that can be done. It also causes humans to behave aggressively towards their dogs in an effort to dominant them which not only doesn’t solve the problem it creates more because you scare the dog and your behavior looks unpredictable to them. Rather, a more useful and kind way to train is to get the dog to cooperate with you.

Mouthing is a completely normal puppy behavior. Dogs use their mouth to explore their world and communicate. We do have to teach the puppy over time to mouth with less and less pressure and to eventually stop. A dog’s ability to restrict their bite pressure is taught when they are a mouthing puppy. It is important for a dog to have bite inhibition so that if and when they do bite, they do not injure a human or another animal. You are absolutely right that you need to keep it friendly. I know how much it hurts right now but this part where they bite as hard as they can doesn’t usually last that long if you handle things correctly. We start by teaching the puppy that biting too hard makes the thing that they want which is us, go away. When the puppy bites too hard, say “Oops” in a cheerful voice and stand up and turn away. You may need to walk out of the room or use a puppy pen that you are able to get out of and leave the puppy in. Come back to interact with her again and repeat any time she bites too hard. Over time you accept less and less mouth pressure to make you leave until she is about 5 months when we can start teaching her not to mouth at all.

One thing that is very important is being sure the puppy is getting adequate physical and mental stimulation. A tired puppy is much less likely to have the energy to be mouthy.

In my experience, combined with the techniques above, playing with another dog regularly is one of the most effective ways to help a puppy stop mouthing. The only dog I ever had who had an issue with mouthing too hard, we did not have another dog during her puppyhood. Every other dog we have had has either not done it much at all or stopped quickly. If you don’t have another dog, try to find a friend with a puppy friendly dog. It is important that the dog likes puppies so your puppy will not get hurt. A puppy kindergarten class may also have some puppy play time and they can help you through these puppy challenges and help you learn how to socialize her.

In the beginning, yes you will only get seconds of good behavior. We have to build on a lot of repetition. And give yourself a break. If you need a break from her, put her in her pen or crate in a room and give her some quiet time. Sometimes puppies get themselves very worked up and a nap is in order. We often find that when puppies are acting out, they are overstimulated or tired. Incorporate naps into her day so she gets into that habit. Behavior is not linear. It does get better and better until it goes away. Dogs have good and bad days and their behavior will reflect that. You should start to see a trend of improvement and hopefully in a few months, it will be a behavior of the past. Good luck and happy training!