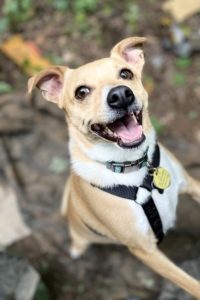 My dog is a little over 1 year old and fixed. He has done the typical mounting when he was younger but I feel it is getting worse. He goes to a dog daycare occasionally (less often now) but was sent home today because he kept mounting. I have seen him at camp and at the dog park he usually will single out 1 particular dog and be obsessive about going over and mounting them. It is usually other male dogs. When he does just play with dogs, I do feel he is getting more aggressive but never is trying to hurt or fight with other dogs. He is just more vocal with growls and other noises and is a little rougher when he plays but always is wagging his tail. Is he just a rough player?

The bigger concern I have is with the mounting, usually if a dog “tells” him to stop by either barking or snapping at him he will stop and leave that dog alone, but if the dog doesn’t fight back, he will go back over and over. I try to redirect him when we are at the park but he will just go right back to the dog and try again. We have 3 other female dogs at home and he never tries to mount them anymore. With one of them he will crowd her and lay his head on her shoulders and just be on top of her but rarely mounts her. He does not ever try to hump people or furniture it is only with other dogs. What could be causing this? He is a large dog about 75+ pounds is this maybe just a phase or should I be doing something else to stop these behaviors?

Dog humping can be embarrassing to people and annoying to other dogs. It is a very misunderstood behavior. The causes for the behavior are not what they would appear on the surface. Once you understand what is causing your dog’s behavior, it should help you understand how you can best help him. Humping is most frequently caused by stress, anxiety, and excitement. This is why we see this behavior so much in dog parks and dog daycares. Meeting new dogs is both stressful and exciting for dogs. It may not appear obvious to most dog owners but there is a lot more going on with dog-dog communication than most people understand. There isn’t any solid information why some dogs seem to have a “hump me” sign on their back. It could be something about their behavior that attracts the other dog. It could be that the dog has a very appeasing nature. It could be a smell they are giving off. We really don’t know.

Dogs can have inappropriate or rude behavior with other dogs without the intention to harm them. First ask yourself, does the other dog look like they are enjoying the interaction? If you call your dog away or remove him with his leash, does the other dog come over for more play? If the other dog is running away, showing stressed body language, averting their eyes and/ moving away, they probably don’t want to interact with your dog. Play is supposed to be fun for both dogs. If it isn’t, it isn’t play. There is a lot going on that people interpret as play, that is a discussion but it isn’t play.

Tail wagging is a very misread body language signal. Not all tail wags are equal and sometimes it doesn’t mean anything at all. You want to look at the whole body not just the tail. Tension tells you that the dog is not relaxed and that is not good. They may be wagging their tail quickly high over their spine. This is a highly aroused tail and usually goes with stiff body and closed mouth. Happy, healthy play looks soft, curvy, silly and exaggerated. The tail may be mid-line with the spine. What the dog’s tail means also depends on their normal tail carriage. I would suggest focusing less on the tail and more on the rest of the body.

I have seen a lot of healthy and unhealthy play over my career. When you see healthy play, you can usually see the difference between that and unhealthy play. Healthy play looks like; play bows, pauses, exaggerated movements, open mouth, low loose tails, self-handicapping, emotional control, bite inhibition. Unhealthy play usually has little ot no pausing, no self-handicapping, increased arousal, one dog is asking humans for help or trying to terminate play, one dog dominates the actions of the other, restricts movement, bully behavior and blood drawn.

I want to be sure to say that unhealthy play doesn’t mean that the dogs aren’t necessarily enjoying it. I have seen many dogs seem quite happy to play in ways that are inappropriate. High energy young dogs tend to be this way especially if they haven’t had a lot of good dog role models in playing. Both dogs enjoying it doesn’t make it healthy and it is fair to say there are plenty of dogs that won’t enjoy it. Dogs don’t have to be showing aggression for the play to be inappropriate. If you are getting to that point, things are going way too far.

If he doesn’t try to mount your dogs at home, it may be because he knows them and feels comfortable with them. He may know that they won’t tolerate it. If he is laying his head on her shoulders while standing for an extended period of time, that is considered rude. A dog doing that to another dog he doesn’t know, usually the other dog will move away or growl at them. He sounds like he may just be a rude adolescent. When dogs are puppies, they often get away with things with other dogs because the dogs know that they are puppies. Once they start to look like an adult dog, they lose their puppy card and dogs start correcting sooner and more harshly. He may be still in rude puppy mode and he needs to either interact with dogs who will appropriately tell him off or you need to make him take breaks when he is acting like this.

Teach your dog a positive interrupter. This is a noise or word that you can use to interrupt any unwanted behavior and redirect him. We like to use a squeaker because dogs often already have some positive connection with it and it can get through all the noise over words. Condition your dog to the squeaker in a few training sessions. Start by training this inside the house. Stand in front of the dog with the squeaker in your pocket or behind your back. Squeak the squeaker and feed your dog an amazing treat. Repeat many times. As the dog becomes conditioned to the sound, you can also practice this outside in the yard so they can generalize the behavior to new environments.

Set up a play date training session with another dog that is friendly but able to set boundaries. If the other dog corrects your dog, that is great. If the other dog doesn’t correct your dog, squeak the squeaker and take your dog aside for 15 seconds or so. You can do some easy behavior cues with them, work on attention, the point being to give them a moment to calm down. Then let them play again and repeat many times. Only a dog can teach your dog how to speak dog. We aren’t dogs, so there is a limit to what we can teach them. Teaching your dog to take breaks when his arousal is rising or when he is behaving inappropriately is the best you can do in that situation.

I would not suggest dog parks or dog daycare. Unfortunately, there are a lot of dogs there that don’t have good dog skills either. There are usually way too many dogs there and the arousal and excitement are way too high. I would suggest rather than a dog park or dog day care, you look for individual dog friends for your dog. You can join Facebook groups for local dog lovers. You may ask your friends if they have dogs that might want to play with him. According to studies of dog play, we find that dog prefer to play in dyads or couples. This is why when two dogs are playing and a third tries to join, usually this causes tension and the play devolves.

It would be a good idea to hire a professional trainer to come watch your dog interact with other dogs and see what they observe. They will be able to point out body language and coach in real time. Locate a Certified Professional Trainer here: https://www.ccpdt.org/dog-owners/certified-dog-trainer-directory/

I am glad you are thinking about this now while he is young. It isn’t something you want him to continue doing into his adulthood so best address it now. The big concern for me is that you may have a dog that is uncomfortable with meeting new dogs and needs a more calm, controlled introduction to another dog that dog parks and day cares don’t provide. Allowing this to continue could lead to a dog that does start to show aggressive behaviors so it’s best to work on his comfort levels with other dogs now. Good luck!