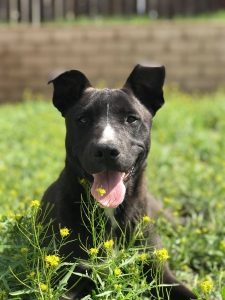 I have a 5-month-old puppy that was doing great at housebreaking. The last month no matter what I do he refuses to use the bathroom outside. Even taking him when I know he needs to go. Even using crate training/housebreaking. He will not go in the crate but no matter how many hours we go outside, nothing, crate, try again, he just will not go outside. When I got him, he was trained to go on pads. I took the pads away and up until recently he was doing great at going outside. I have sat outside with him for hours, even having him drink bowls and bowls of water. He will still hold it. I don’t believe any dog is untrainable, but I’m completely out of ideas.

Puppies are frustrating little beasts for sure. It’s important when a dog is having a behavior problem that we try to figure out the cause of the behavior. We can look at some common reasons why a dog or puppy may not want to go to the bathroom outside. Then we can talk about potty training tips in general that might be helpful for your situation.

First, we need to rule out any medical causes to this behavior. If a dog has a medical problem, there is no amount of training that will fix that behavior until they get the medicine they need. Puppies can develop UTIs. If you notice when he pees if he only releases a few drops or pees frequently, that could be a sign of something wrong. The vet will just need a urine sample to examine and usually the treatment is just antibiotics. Holding urine for a very long time can cause UTIs in dogs.

If he gets all clear from the vet, another reason why he won’t potty outside could be some fear or anxiety. I have a dog that is afraid of fireworks and gunshots, and we often have a month or two where she doesn’t like going outside as much after July 4th. It could be even more subtle than that. It could be a lawnmower, a yard decoration or even smells from other animals. Even if he will go outside, he may not feel comfortable or safe enough to potty outside. He feels safe and comfortable inside so he may prefer to go there because of that.

If you think fear may be a potential cause, it can be helpful to set up a puppy pen in the backyard in the quietest spot away from noises and visual stimuli as much as possible. You could even add some blankets or sheets on the walls of the pen to make it more private. Having the same spot to go to every time helps signal to the dog what you are wanting them to do. It will make them less likely to get distracted. It will concentrate the smell in area as well which should help.

Another thing that happens a lot is people think the dog is housetrained before it actually is and they start to relax their supervision. Then the dog starts to have accidents in the house. The floor starts to smell like urine and they feel more attracted to going in places where it smells like them. Be sure to clean the floor thoroughly with an enzymatic cleaner to get up any residual smells. Puppies prefer to potty on soft surfaces like blankets, rugs and carpets. I always pull up all my rugs until the puppy is housetrained and keep them on hard floors.

Create a schedule of potty breaks and stick to your routine. Puppies tend to drink more water when they first wake, after eating and after play so those are times they will need to go outside. In generally, I recommend taking the puppy out once an hour as well as the above-mentioned times. As you get to know the dog, you should start to learn when he typically goes to the bathroom and try to take him out just before those times.

The only way that I use potty pads would be any time I know I have to be gone longer than what the puppy can physically hold it. If I have a 2-month-old puppy they are supposed to be able to hold it for 3 hours so if I need to be gone any longer, I put a pad down in a pen that has the crate in it with the door open. Some people want the dog to use the pads only and that is fine, and you would train it the same way you train them to go outside. If you use them when you want the dog to go outside, you have to gradually wean the dog off the pads, and it just adds another step. You might want to try putting a pad in the pen outside in the potty area to encourage him to go there and then just dump the waste in the area and hopefully experiment with getting rid of the pads as soon as possible.

Another thing that happens is puppies have a very short attention span and they get very easily distracted by all the smells and sounds outside and they forget why they are out there.  Or sometimes people start feeding the treats before the dog finishes and they get excited, and their stream stops. They also do not have good bladder control so they may not fully empty their bladder in one go. If the puppy pees multiple times, be sure to walk it around for another ten minutes or so after he pees the first time. 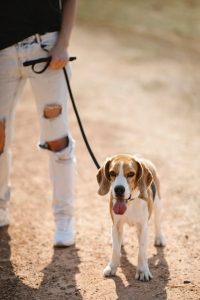 Keeping the puppy on a leash the majority of the time is usually pretty helpful with minimizing distractions. When you walk the dog outside, rather than letting the dog off leash, walk him over to his potty spot on leash and just walk around in circles in that spot until he goes. It helps if it is as boring as possible so there is less potential to be distracted. If you have another dog, don’t let them out until he goes potty. Other dogs are the worst distractions for a puppy. In the house, the leash is useful to help keep the puppy close enough that you can see him at all times. You can use a carabiner and clip the leash to your belt or attach him to a piece of furniture.

If you have a fenced in yard, let the puppy off the leash to run around in the yard as an additional reward after he goes. If you don’t have a fenced in yard, you may consider a long line to give him some room to run around as a reward. It’s important to let the puppy have a good 10 minutes or so outside after they go potty. What can start to happen is the dog associates going potty with going back inside. They begin to delay and delay going to the bathroom because they don’t want to go inside. Walk the puppy around, let him play or let him off leash if you have a fence as a reward and to prevent delay behavior.

House training takes a lot of time and patience. In general, we cannot say a dog is truly housetrained until they have gone several months without an accident. We should stay on the house training routine until then. Once you figure out the trick to help him start going outside again, I think the training will start to pick up pretty quickly. Good luck!