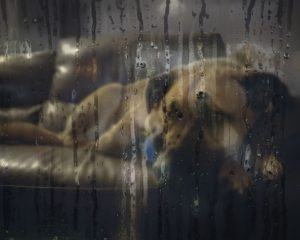 When we got our 10-week-old puppy almost 2 weeks ago it started raining. At our house, anyway, it rained till last Saturday. I would take my pup out almost every hour, but he simply would sit between my feet and not “do his business”. We sometimes stayed out for 20 minutes in the rain with no results. Immediately upon getting inside again he would pee/poop. Now he does the same thing even if the weather is nice! How can I get him back on track?

Puppies certainly are sensitive, fickle little creatures. It doesn’t take much for them to decide something is bad. One bad experience and they are just convinced it is the worst thing ever! Unfortunately for us, puppies would go inside the house where they feel safe and are comfortable. Hopefully, there will be some consistent nice weather so we can change this around.

For a dog to be able to be housetrained, they need to feel safe. Dogs that are just adopted often will not use the bathroom outside because they don’t feel safe. It’s a vulnerable position to go to the bathroom. It may be noisy outside, or they may just not be used to the new environment.

If he is too afraid to go outside and won’t move at all, you will probably need to set up an indoor potty station for now. A puppy pen works really well for this purpose. Cover the floor in the pen with potty pads and take him over there when you think he needs to go to the bathroom. Add a cue to the potty behavior by saying, “go potty” as he is squatting to go.  Feed him a treat when he finishes up. Teaching him a cue to go potty is a large part to getting him to go in the rain later on. Once he understands what the cue is, it is a way to get him to quickly go outside. Don’t worry, this isn’t forever, you will get there but you don’t want to force him to go outside at this point.

There are also things to do to get him used to the rain. Take a large umbrella outside to protect him from the rain. You can also teach him to accept having wet paws. Place a wet towel on the floor and feed a treat if he steps on the towel. Toss the treat off the towel so he has to get off and get back on. In the summer, play in a mister sprinkler outside. They make really adorable splash sprinkler pads. Play games near the water.

If you just can’t get him used to being wet, you can create a dry area in your yard. Maybe a small, covered area with an awning to protect him from the rain and snow.

If your pup is really scared and just won’t move out from your legs, then we need to take steps back to get him feeling better. You need to figure out where his fear begins. Is it when you grab the leash or when you walk to the door? Leash him up and feed him several treats in a row just for having the leash on. Take a step towards the door and toss a treat behind you and repeat several times. Be sure the dog looks relaxed at each step before you progress. Open the door and when he looks at you toss a treat on the ground in front of him. Close the door and repeat at least 10 times. Step through the door, when he looks at you, drop a treat on the ground. Go back inside and repeat at least 10 times. Step through the door and treat for eye contact. Slowly start to move one step away at a time treating for each step.

Once you get to the point where he is comfortable being outside, you can move on to the next step. On your days off, I would suggest you make plans to be outside for the majority of the day. Pick the quietest part of your yard. Make yourself comfortable. Get a nice chair, a podcast, maybe some wine and some really great treats for the puppy. If you don’t have a fence and the puppy needs to be on a leash, use a light long line so he has room to run around. If you stay outside for hours, I will bet you that he is going to go to the bathroom eventually and you will be there to say, “yes” and give him many yummy treats. Throw him a party. Tell him how wonderful he is and on and on. If you think he really wants to go inside, then you can bring him inside for a while as a reward. Be aware though that some dogs don’t completely empty themselves on one go and need to stay out a little longer and go again.

If you are outside and he doesn’t go potty, try putting him in his crate for 15 minutes or so. Try again to take him out. We don’t want to give him any freedom to walk around the house until we know he is empty.

Think of activities that you can do outside with him.  If we can find fun things to do with him outside, he will start to feel more comfortable outside and create a more positive association for him being outside. If he likes food, play find it in the grass. Toss a treat on the ground and tell him to “find it”. You can scatter kibble in the grass for him to find for kibble hunting. Try hiding boxes with treats in it in the yard. Play training games with him like recalls, leash walking or attention games. Play fetch or flirt pole, the activity will help get things moving. Feed him his meals outside. Anything you can think of that is fun for him, if the weather is nice, then do it outside!

Practice teaching your pup some easy cues to help him gain some confidence. Target is a great cue to start with. It’s very easy to teach and is quite useful in getting dogs to move around. Just place your forefinger and middle finger in front of his nose about half an inch away. When he touches your fingers, say “yes” and treat. Teaching the name game is another useful cue. Stand in front of him and say his name. Feed him a yummy treat after you say his name. Once he starts to show recognition, like his ears perk up when you say his name, you can start working in distractions. When he is turned away in the house, call his name once and wait for his head to turn towards you. When it does, say “yes” and hold a treat by your leg for him.

The important things here are that we are not forcing him. We are changing his opinion about things by pairing it with something really great. As far as the house training, it’s just a number game. The more often he gets rewarded for pottying outside, the more he will choose to do it. Good luck!