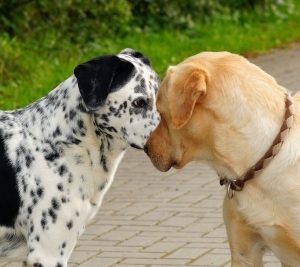 Dear Crystal,
Just read your article on humping in dogs.
However, I have a totally opposite problem. Our 13-month-old, neutered coonhound seems to inspire other dogs into humping him. He’s not particularly submissive by nature and never humps himself. And yet there have been a number of occasions in leash-free parks where he became the object of unwanted, and in a case or two, very determined attention. In most cases, he simply runs away. The smaller the other dog, the helpless my dog seems.

Unfortunately, there isn’t really any scientific data to point to as why some dogs seem to have a perpetual “hump me” sign on their back. It does seem to happen that some dogs seem the target of unwanted advances of other dogs more than others.

Humping is usually an arousal, excitement or stress related behavior. It could be all three at the same time. Dogs at the dog park are usually experiencing a lot of arousal, excitement and stress. Hounds usually like to run a lot so maybe there is something about the way your dog moves that excites the other dogs.

When considering play between dogs, the most important thing to look for is mutual enjoyment between both dogs involved. Believe it or not, I have seen many a play group where one dog is truly not bothered by being humped and some where the dogs simply take turns humping each other. If your dog is running away, he is not enjoying that attention. I know my dog can always tell when another dog is about to start trying to hump and she darts off.

When I am running playgroups, if I have any doubt about whether one dog is enjoying an interaction, I usually leash the offending dog up and walk him away. I then watch to see if the other dog comes back for more play. It is a pretty good indication that they are having a good time if they come back for more. I am not sure how you could do that at a dog park unless you know the other owner. If your dog has a recall in this situation, you could call him away and try to walk somewhere else for a little while or go to a different area of the park.

I would suggest interrupting before the actual mounting and humping begins if possible. Dogs that are about to hump, usually place their head on the other dog’s back or shoulders so you can tell when they are trying to position themselves. I would interrupt at that point.

If your dog’s body language isn’t always super confident, you could try to teach him some more assertive body language and then cue him to do that behavior when you see another dog is eyeing him. You could teach him to stand taller and lift his head up or turn frontally. These behaviors mimic a more confident dog.

Ideally, a dog would offer a correction to the dog attempting to hump such as turning away, lip licks, whale eye, freeze, lifting his lip, soft growling or an air snap. If the other dog understands body language and is a good communicator they should stop. Unfortunately, a lot of dogs are fairly inept at communication so they either ignore the signals or it can escalate to a fight.

Dog parks are pretty tricky to navigate. There aren’t any tests to make sure a dog should be allowed in and most owners are fairly unobservant and defensive about their own dogs. They don’t pay attention or understand when a dog is being a bully and don’t realize how important it is to stop.

What does healthy play look like? How do you know when play is appropriate or not? Healthy play can in fact sound and look pretty ferocious at times. As I mentioned, healthy play is mutual enjoyment. There is usually play bowing especially if they don’t know each other. Play bows say to the other dog, “Everything I do after this is in play.” This avoids tension and misconstrued signals. Healthy play should take pauses. Usually, the dogs will rest a moment and then go back to play. The movements are large, loose and exaggerated. Mouths should be open. The dogs will self-handicap with a smaller dog and show emotional control. It is not required that the dogs switch places in a role reversal as many people believe. Some dogs really like being chased and have no desire to chase.

Unhealthy play is pretty much the opposite. Once you have watched healthy play and then you see unhealthy play, you can really tell the difference. It is usually pretty intense and doesn’t stop until the dogs tip over into over-arousal. There are little or no breaks in play. You can see the arousal increasing. One dog may try to stop playing. One dog may restrict the freedom movement of the other. Unhealthy play needs to be interrupted before it tips into aggression and a fight happens. Practice frequently calling your dog away to take breaks. 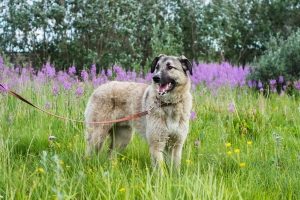 If you see a lot of unhealthy play going on at the dog park, I suggest leaving and just taking a walk with your dog. Unhealthy play can affect a dog’s behavior around other dogs if he feels bullied or helpless.  Most dog trainers are not fans of dog parks because of the amount of unhealthy play we see or dogs that are outright unfit for a dog park.

Data shows that dogs prefer to play in a “dyad” or group of two. This is why when two dogs are playing and a third comes in, there is usually some trouble with one dog not wanting the other to join in. My preference is for my dogs to have regular playmates or to go to a well-run dog daycare where the staff understand how to interrupt play and how to partner up dogs.

I hope this helps you understand the situation a bit better and why it is so important to step in and advocate for your dog. If he were standing up for himself, I would say you can let him handle himself but it he is clearly unhappy with the attention. You don’t want him to end up being traumatized and not liking other dogs at all. Remember you don’t have to go to the dog park at all.