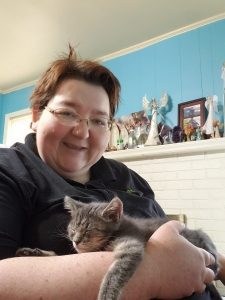 Online Dating? Well, Sort of…April’s first adoption from Blue Ridge Humane began with love at first site online: “ I saw her online and just fell in love with her coloring. I called the Adoption Center and I was lucky enough to coordinate with her actual foster.”

That’s how Lily, formerly a kitten named Blizzard, came to join April’s family. Blizzard’s personality quickly showed that she better fits with Princess Tiger Lily from Peter Pan for her namesake—regal and a little bit spoiled.
A houseful of two other kittens, an older dog, and a couple of teenage sons required only about two days of introductions—after a few hours of posturing at first, of course, but it didn’t take long for Lily to assume the leadership role. April says, “My favorite thing about Lily is that she doesn’t put up with any garbage from her new siblings. I have been amused to watch her school them in the ways of Empress Lily time and again. Additionally, she has begun to enjoy being a cuddlebug and will nudge you when she wants attention. We all love her. Thank you so much for the experience and allowing us to be Lily (Blizzard’s) forever family.” Happy tails, Lily!
If you are looking for your pet match, check out our available animals online at www.blueridgehumane.org/adopt/.
August 16, 2021
https://www.blueridgehumane.org/wp-content/uploads/2021/08/Blizzard-lily-3.jpg 2000 1500 Laura Rice https://www.blueridgehumane.org/wp-content/uploads/2016/08/BRHS-Logo-01-1030x305.png Laura Rice2021-08-16 12:50:372021-08-16 12:50:37Lily’s Happy Tail