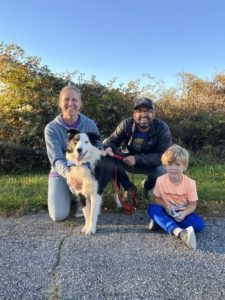 We loved getting this Happy Tail update from Katie on Townes (FKA Laddie)!
She shares: “We have had Townes (formerly Laddie) for several weeks now and could not be more happy that he is a part of our little family. The second night that we had him, my husband took him on a long hike in the woods behind our house. He was nearly two miles away when something startled Townes and he bolted, pulling the leash out of my husband’s hands. He called me moments later in a panic saying he had lost the dog, but when I looked outside there was Townes, sitting by our door. He had run a 4 minute mile straight back to our house! Two days later our son was sick and Townes immediately curled up on his feet and would not leave his side. He’s been a faithful companion and the best furry little brother to our son. Townes sleeps in his room nightly – keeping the zombies away. The folks at Blue Ridge Humane Society went out of their way to help us connect with Townes and make sure that we were a good fit for each other. I can’t thank you all enough for bringing us together!”
Thank you Katie for sharing how Townes has made your family complete! We love being a part of making happy tails like this happen, and your support through adopting, donating, and volunteering is key to continuing our work! Find out how you can get involved here: https://www.blueridgehumane.org/get-involved/
Make your own Happy Tail come true by adopting any of our animals here: https://www.blueridgehumane.org/adopt/
December 27, 2021
https://www.blueridgehumane.org/wp-content/uploads/2021/12/Townes-Gotcha-Day.jpg 2000 1500 angelap https://www.blueridgehumane.org/wp-content/uploads/2016/08/BRHS-Logo-01-1030x305.png angelap2021-12-27 11:20:082022-01-03 16:56:01Townes’s Happy Tail