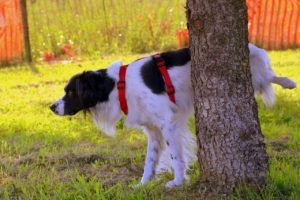 Hi, we took in a 12-week old pet store male Labrador. He was given to us from a friend that couldn’t keep him any longer. I’ve had trouble getting him potty trained. Funny thing is, I take him out to the spot and he will potty on command however he can’t seem to learn how to show me he needs to go. He also does not squat to pee it just comes out while he stands there. I often don’t catch it in the act. I tried bells on the door but my partner is hard of hearing so that won’t work. The puppy is now 6 months old. We let him out every hour in a half. We have never cage trained him. I didn’t want to do that fearing the whole puppy mill conditions he may have been raised in “in a cage”.  Any tips would help.

Potty training is a lot of work! I just finished training my puppy a few months ago so I can sympathize. Signaling to go out is usually the last piece of the puzzle in my experience and can’t really happen until the puppy has developed some bladder and bowel control. At 6 months, he should have some of that control so you should be able to teach him to signal you.

First, if you aren’t catching him in the act and he is having accidents in the house, that is telling me that you might be giving him too much freedom. He should never be out of your sight. If you can’t watch him, he needs to be confined in some way. That could be a puppy proof room like a bathroom or utility room or a puppy pen.

When you are able to watch him, a popular method is the umbilical cord method. This is where we use a leash to attach the dog to us at all times. This way we can keep an eye out for those signs that they need to go out. These would include sniffing, acting excited, whining, circling or looking at you to go outside. You mentioned he doesn’t squat to pee. My male dog doesn’t really either but I can usually tell when is about to go as his stance widens a bit. Maybe your puppy does have some small signal you are missing. I would suggest really staring at him when he is urinating outside. Maybe even take a picture and compare it to a picture when he is standing normally.

We do have to consider that crate training may not work with a dog who may have been raise in a puppy mill. If a dog is kept in a crate all day long and is forced to defecate and urinate in the crate, they will continue to use the bathroom in the crate if we try to use it as a method of confinement. If that is the case, what I usually suggest is using a puppy pen lined with puppy pads on the floor and the crate door being opened for sleeping in. In this way, we can start to teach the puppy an alternative location to go to the bathroom. This would be used when we needed to leave the puppy longer than he could physically hold it. 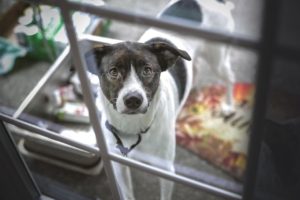 Personally, I have found with all of my dogs, they learn if they stand and stare at the door, I will ask if they want to go outside. They usually will give me some signal that yes they do want to go out. That could be ears perking up and turning towards the door, pacing, whining or barking. I come to the door and let them out. Now this may not work if you can’t see the door and the dog doesn’t know to come tell you to let them out.

We can start training this by using a sliding glass door or a door that has a security chain. We don’t want the dog to be able to open the door on his own. If it’s a sliding glass door, just open it a crack. Walk the dog on a leash over to the open door and let them smell the air outside. Then ask, “Do you want to go outside?” Wait for some confirmation from the dog, circling, whining, barking or scratching the door and then let them out.

Try this next method, first thing in the morning because you know the dog is likely to need to potty. Carry the puppy from the crate if possible so he won’t have an accident on the way. If he is too big, just walk him on his leash. Walk over to the door and ask, “Do you want to go outside?”. If you see any affirmation, open the door, and walk him to his potty spot.

We also want to avoid the dog using the signaling to go outside to play rather than going potty. We need to make it clear that this cue means that the dog needs to go to the bathroom, not just play outside. If you ask the cue, “Do you want to go outside?”, only walk the dog to the designated potty spot and be all business. After he goes potty, you can walk him over to a different area to play or play inside. We do not want to play in the bathroom area of the yard. 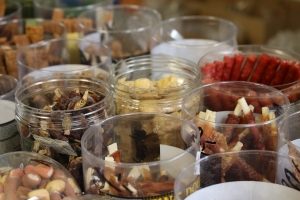 It is critical in potty training that you are feeding the dog, a high value treat when he does go potty outside. We need to make it pay to go pee and poop outside so that he will be motivated to try to go outside. A lot of people try to use praise and that usually is not a strong enough motivator. Also, be sure to use a high value reinforcer, like a moist meaty treat rather than a biscuit. We want the dog to be very excited about the reward.

Another approach could be to teach the dog to bark at you to go outside. If he is already a barky dog and demand barks, this may not be the method you want to train. However, if you do, you first need to teach the dog to bark on cue. You would then take him to the door when you know he needs to go on a leash, asking him to bark, open the door, feed a treat and walk him to his potty area. Practice for a few days and then start to try and see if when you walk him to the door if he will bark on his own without being cued. Don’t open the door until he barks.

Be sure not to be lax in your supervision at this point and really keep an eye on him like a hawk until its been a few months without any accidents. Hopefully one of these training methods will help him learn how to tell you when he needs to go outside but the other piece is making it much more rewarding to go outside than inside. Good Luck!

Pets for Vets and Seniors for Senior Adoption Programs Begin