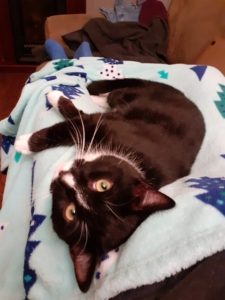 Here is a little bit about Figaro from his foster:

“Figaro has a big, fluffy face, and a teeny-tiny kitten meow that he’s not afraid to share with the world!

Figaro was shy when he first arrived in his foster home, preferring to spend his time in a very quiet spot under a chair, but we soon discovered that this boy *loves* to be petted and likes fleece so much we’re pretty sure he thinks it’s his mama!

He still enjoys lounging in his hidey-spot, but also comes out for lap time. He’s very interested in the world beyond his room now, and is looking forward to a home where he has the run of the house.

Figaro is a great cuddler with an audible purr. He likes to lie on your lap or lounge against your leg on the couch, especially if there is a super-soft fleece for him to knead. Rub that fluffy face and head, stroke his back…he’ll even let you go in for a belly rub or two.

We have 3 resident cats. We did some scent swapping and some visual contact, and yesterday I allowed Figaro out of his own room for a few minutes with careful supervision. My cats mostly sat very still and watched him, and he explored carefully (but confidently). He sniffed everything and looked at the other cats, but nobody tried to interact directly.”

If you are interested in this A+ cuddle bug that has a teeny voice with a big head (and heart) then consider applying to adopt Figaro at t.ly/qE9a. Adoption fees are half off right now so hurry up and scoop this lovable boy up!