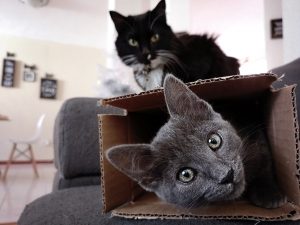 I have two young cats. Parker is the new guy and Miles the one who was an only cat. They are getting along well generally, playing together, hanging out peacefully in the same spots, using the same litterboxes, etc. The problem is making sure they both get interactive wand play. If a wand appears, Parker is on it and doesn’t tire quickly. Even if I entice Miles out for one bat or pounce, as soon as Parker joins in which is inevitable, Miles calls it quits. My current solution is to play with Parker, then shut him in another room, and play with Miles.

I often have to shut Parker in his own room for meal times too as he’ll scarf down his wet food in the safe room and come eat out of Miles’ bowl while he is too, scaring Miles off and finishing his, or get frustrated with his slow feeder for dry food and come to check out what Miles is eating from (usually also a slow or puzzle feeder for stimulation–he’s a slower eater and takes a few breaks during meals) and work on that instead. With the dry food, Miles shares sometimes but often leaves to check out Parker’s instead once he shows up.

The funny thing is that in their play together, Miles can often be the bully, attacking way beyond the point when Parker wants to stop, while with play and food, Parker’s presence drives Miles away from things he likes. Parker came from a home with other cats and immediately treated Miles like family, while Miles is still getting used to the love and can get a bit prickly when licked too much or when Parker snuggles up for sleeping. I’d love to be able to take turns playing with them in the same space and not to have to feed them in separate rooms with closed doors. Do you have suggestions for what I might try?

First, I want to compliment what a wonderful thoughtful kitty owner you are! It sounds like you are doing a lot of things right. I don’t have an easy answer for you. It’s one of the difficult parts of being a trainer. I would love to be able to give you some training magic to try but sometimes there just isn’t that type of solution and that is due to the nature of cats.

Cats are actually solitary hunters. While a pride of lions may hunt together, most cats do not. It is actually important that we not try to play with the cats together at the same time as it can lead to issues. It can cause competition between the two and can lead to territorial disputes. In addition, it can cause stress for one cat to want to play and be thwarted by another. The cat gets excited by the stimuli and has no outlet for energy that has built up.

You are doing the right thing in separating them for play. I wonder if you could rearrange the order of things to be more in line with a cat’s natural instincts and work better with feeding. 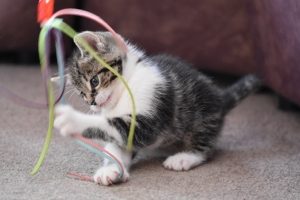 I would suggest putting Miles in the room and then having a play session with Parker. Then put Parker in his room with his feeder and canned food. Then bring out Miles for a play session. If you are playing with each cat for about 15 minutes, I would think that should be long enough for Parker to eat. Then put Miles in a room for his feeding. Since a cat in the wild would kill his food, having a play session before eating mimics that behavior.

Species specific behaviors are really difficult if not impossible to change. The other part of the equation is that you can’t really teach an animal not to do something when you aren’t there. When training it’s a lot easier to teach the cat what to do rather than what not to do. If I were going to try a training solution for Parker trying to eat Miles’s food, I would probably teach Parker a mat cue. That is basically a cue that says the cat should go to a mat and stay there until released. It could work but it would take a fair amount of work on your part. I also would think that Miles still might not feel comfortable with Parker in the same room while he eats so you could have him in a mat with you while Miles eats in the other room. Parker might also just get up if you aren’t watching.

Having to compete for food and play is stressful for cats. Most cats want to eat what the other cat has instead of their own food. It’s such a common problem that someone invented a feeding box that has a flap activated by a collar the cat wears called the MeowSpace. You could make something similar with a cat door and a box you build or put the cat door on a room that only that cat has access to. You could make that where Miles eats. They also have feeders that read the cat’s collar and microchip and only open for that cat but I am not sure how fast they would close if another cat approached.

Miles having been an only cat could mean that he is a bit under socialized with other cats. This can lead to insecurity, fear in certain situations. Their relationship is also new, so they have to work on building a relationship and trust.

Play aggression involves uninhibited biting, clawing, stalking and attacking other cats. It usually occurs at morning and night when cats would normally be hunting. If you notice this type of behavior around that time, you could try to do your feed and play sessions before that time of day. That was you are satisfying their needs which may help them get less worked up. You can also keep them separate during those high play times for now. If you see dilated pupils, swishing tail, hiding, crouching, throw a toy just before that cat is about to attack. That redirects the cat onto the toy and give the other cat a way out.

It can be difficult sometimes to tell what is play and what is aggression. Some cats play more roughly than others. I usually ask myself if everyone involved looks like they are having fun and/or if they continue the play. Does Parker try to get up and leave? Does he run off and hide? That could give you some indication of how he is feeling.  If you break it up and they go right back to playing, it could be Parker isn’t that bothered.

Make sure he has escape routes and if you see Miles following him maybe close the door after him to give him a chance to settle down. I would suggest reading up on cat body language to look for the signs that one cat is feeling uncomfortable. In general, it is really helpful to have some insight into the cat’s inner workings to help them. 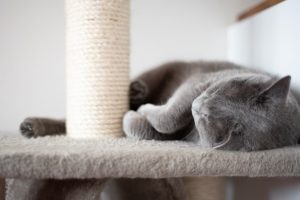 Play aggressive cats need a lot of play and room. You may want to add some additional perches or trees to add territory. It’s pretty common in cats that were raised alone so it may be what is going on or it may be normal play. Work on more solo play sessions with Miles as well to make sure he is getting the exercise he needs. You may also work on walking a kitty on a harness to give a different type of enrichment. A catio is also a great way to add some interest to a cat’s life.

I am pretty surprised that Miles lets Parker lick him at all or snuggles. All my cats were obtained alone as kittens, and I have never had two cats that will snuggle or lick each other. I have heard its uncommon unless they were raised together so to me that sounds like a pretty good sign on how they feel about each other.

Hopefully, in time the cats will become more trusting and bonded with each other. Removing any stressors goes a long way to building that relationship. If we can put ourselves in the cat’s place, it can help to make that extra effort to keep them calm and happy. Good luck!